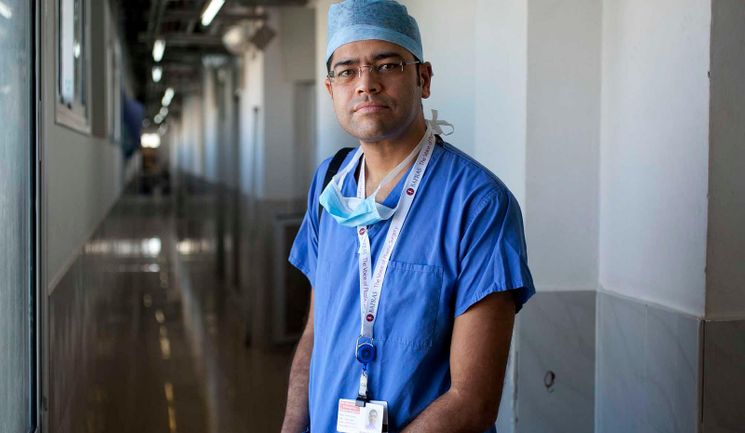 Mr Naveen Cavale’s family members have had medical careers spanning seven generations, so medicine really is in his blood. However, while he’s now a consultant plastic surgeon and surgical trainer, the path to achieving his career did not start smoothly.

After completing his A-levels, Mr Cavale was rejected from every medical school that he applied to. However after continuing to apply for the next two years, his perseverance and determination finally paid off. He was accepted into University College London (UCL) to study Anatomy and Neuroscience, and then an MBBS, graduating in 1995. He went onto complete an MSC in Surgical Science and an MRCS at the Royal College of Surgeons, specialising in plastic surgery.

On his decision to go into plastic surgery after graduating, Mr Cavale says, “For my first real job, I worked as junior house officer in plastics at The Middlesex Hospital. I really enjoyed working there and I could see how much the people I was working for loved their job too. What interested me the most was the fact that plastic surgery focuses on something different every time. Normally when you specialise in something medical, it focuses on just one part of the body – for example being an eye surgeon or a heart surgeon. Working in plastic surgery means you get to be a head to toe surgeon!”

He now has an NHS plastic and reconstructive practice in King’s College Hospital, London as well as working privately for the Cadogan Clinic in central London, specialising in breast surgery, rhinoplasty, blepharoplasty and prominent ear correction.

On the increasing popularity of plastic surgery, he says, “I think it’s just become less taboo. People used to have a misconception that aesthetic procedures were only for vain people or strange people. Now it’s much more normalised, and people realise that these can be done subtly and well.”

Mr Cavale is the national secretary for the International Society of Aesthetic Plastic Surgery (ISAPS), president of the Royal Society of Medicine, trustee for the British Foundation for International Reconstructive Surgery and patron for King’s College London Medical School.

Despite his love of plastic surgery, Mr Cavale refutes the sometimes assumed notion that surgically-trained practitioners are of higher standing than non-surgical, stating, “I don’t think plastic surgeons are experts in everything, which has been an argument that has been put forward before. The way I see it, the gap should not be between surgical and non-surgical and instead should be between clinician and non-clinician. I think both surgeons and non-surgeon practitioners all agree that ‘non-medical’ people should not be offering treatments that are medical.”

He believes that it’s important for surgical and non-surgical practitioners to learn from each other, stating, “I think aesthetic surgeons and non-surgical aesthetic clinicians should definitely work together more. We have loads to learn from each other and have our own clear areas of expertise. Surgeons are also becoming more commercially minded, which is something that non-surgeons have always led on. This is great as it means we are finally speaking the same language. Particularly, we are now seeing more and more surgeons on social media, which is brilliant, as this means more messages relating to safety are now being publicised by both surgeons and our non-surgical colleagues.”

Mr Cavale believes that aesthetic conferences are a key part of bringing together surgical and non-surgical practitioners, commenting, “The annual London ISAPS Symposium I organise has been great for bringing the two together properly, as well as the CCR Expo done in conjunction with BAAPS, and I would encourage all practitioners to attend, even if just virtually this year. I’m proud to be a part of creating a community that encourages the sharing of knowledge and expertise with all colleagues.”

Alongside his surgical work, Mr Cavale has been doing humanitarian work in Gaza, a Palestinian territory, since 2014. The project sees him, and other British surgeons, help in local hospitals to treat war wounds and damaged limbs.

On adapting to the environment, Mr Cavale comments, “It was really tough at first. We were helping three-year-old children that had been damaged by bomb explosions and who faced life threatening injuries – of course that affects you. But it also helped me to grow as a person, because I was in a situation so far out of my usual comfort zone. I’ve been doing these trips for six years now, so I’ve got a lot more used to being around those kinds of things and I intend on going back out there once we can start travelling again.”

On his plans for the future, Mr Cavale says, “I never want to become complacent or bored, so I’m always looking for a new way to expand my skillset. I’d hate for my job or my life to become routine and repetitive – that’s why I have to keep taking part in new projects. I think it’s important for people to do that when working in this industry especially, because it’s a speciality that’s constantly changing and evolving.”