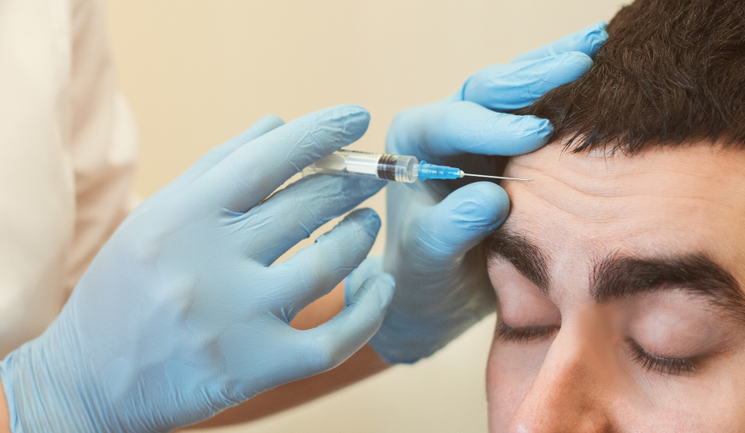 Men are the fastest growing segment of patients in aesthetic practices. In the US, they represent approximately 10% of consumers of injectable cosmetic treatments and this number has grown 355% in the last two decades.1 It is estimated that there were approximately half a million male patients treated with botulinum toxin (BoNT-A) in the US in 2015,2 and between 2010 and 2014 the use of BoNT-A in male patients increased by more than 80%.3

Typically, men tend to seek mostly minimally-invasive procedures and those with minimum or no downtime, such as BoNT-A, dermal fillers and intense pulsed light treatments, as opposed to surgical procedures that require downtime and may result in some scarring.3,4 I find that recent increased social acceptability and greater perception of safety and efficacy of BoNT-A procedures encourages male patients to pursue and request those treatments.2,4

It is important for practitioners to recognise physiological and anatomical differences between male and female faces (known as sexual dimorphism) to avoid over-feminising a male face. As there are also differences in expectations driven by what primarily appears to be a desire to improve men’s competitiveness in the workplace, detailed below, male patients require a gender-specific approach when using BoNT-A injections. The male-tailored approach includes consultation, injection technique and the consent process.1 In this article, I outline what I believe to be the motivations behind male toxin treatments, discuss my preferred technique and provide an example of my work.

In 2016, the Department of Dermatology at the University of California conducted an online study with 600 men aged between 30-65. They asked how concerned they were by the appearance of 15 age-related facial features. The results of the survey indicated that 60% of men were concerned about the appearance of their glabellar lines.5 There are underlying anatomical and physiological reasons of why a male forehead is more susceptible to wrinkling. For example, the skin is markedly thicker, facial musculature is stronger and sun-protective habits are less common than in females.3,6

I have found that one of the main reasons that men consider BoNT-A treatments does not appear to be related to visible improvement of facial appearance, but rather to achieving a more ‘relaxed’, youthful and less angry look. I have found that this is particularly relevant for my patients that work in customer-facing roles. Interestingly, results from a questionnaire conducted by 107 members of the American Academy of Facial Plastic and Reconstructive Surgery suggested that both men and women want cosmetic treatment so that they can look younger, particularly women. However, members noted that men are more likely than women to cite a work-related reason and competitive reasons as their motivation for treatment.2 When asked during their initial consultations why men might be reluctant to undergo cosmetic procedures, the main reason for hesitation noted by those surveyed was fear of appearing feminised.7 Some might have experienced this undesirable appearance after receiving BoNT-A treatments that did not include a gender-specific approach. Men tend to be aware of sexual dimorphism of facial features and typically wish to maintain or enhance traditionally masculine features.8

Prior to treatment it is important to remember key characteristics of the male face. There are differences in the facial skeleton (male skulls are larger and differently shaped), and they have greater glabellar projection. Men tend to have more prominent supraorbital ridges (they provide a good landmark for eyebrow position), their eyebrows are flatter and positioned lower on the orbital rim. For comparison, in women, the eyebrow is typically positioned just above the supraorbital ridge with the arches peaking in the lateral third of the face.4 Forehead height and width are also greater in men, with a greater backward slope.4 Presence of androgenic alopecia further optically increases the height of the forehead.2 In women, forehead contour is higher, smoother, and rounder to the point of forward protrusion. Female orbits are proportionally larger in relation to the size of the skull. In the lower face, males tend to have a wider and larger chin with more significant forward prominence, and a prominent flexure of the mandible.2,4

Physical examination should include assessment of frontal and oblique view, at rest and on animation, identification of baseline asymmetries, static and dynamic rhytides and estimation of facial muscle mass.2 Prior to consenting, educating the patient on the procedure, informing them of adverse events and establishing expectations from treatment should take place, as with all treatments.

Patients should be made aware that satisfaction rate increases with continued treatments. Typically, dynamic lines improve first, while static lines can improve with repeated treatments. Common side effects include swelling, bruising and erythema. Men are also more prone to develop ecchymosis due to greater density of microvasculature.4 As for every patient, appropriate selection, individually adjusted dosing and placement of injections is key to achieving desired outcomes. Treatments with neurotoxins in male patients should aim to preserve lower position of the brows and flatter arches.9,10

To my knowledge, the only multi-centre, randomised, double-blinded, placebo-controlled study that adjusted BoNT-A dosing for different sexes was published in 2009.11 Results suggested that men are less responsive to the doses used. Due to larger muscle mass and men having more severe rhytides than women, larger doses of BoNT-A are typically recommended in male patients. The author suggests doses higher than 20 units, however it greatly depends on the individual, muscle strength and expectations.12 Softening of the horizontal lines while still allowing movement is often preferred in men. The position and shape of the brow is also very important as an arched brow will usually feminise the face.2 Improperly administered BoNT-A can cause brow ptosis, sensation of heaviness, and make male patients look older, as well as potentially impacting their vision. A consensus for treating the face and neck was published in the Plastic and Reconstructive Surgery journal which detailed the following recommendations for treatment of the frontalis muscle:13

The consensus shows the trend towards neuromodulation rather than paralysis, including lower dosing of the upper face, more frequent combination treatments with hyaluronic acid fillers and intracutaneous injections where indicated to limit depth and degree of action.13

Men tend to have deeper furrows in the glabella.2 Softening of those lines can decrease appearance of aggressiveness and make the overall face appear more youthful. Relaxing glabellar muscles shouldn’t result in their immobilisation. This will create an unnatural look and can additionally result in lifting of the lateral brow. Therefore, while treating the glabella in men I recommend treating the forehead laterally.

In my practice, typical treatment will include:

A 55-year-old male patient presented in my clinic with primary concerns regarding appearance of his forehead and periorbital rhytides. He felt that this made him look tired and unhappy.

He had his first and only BoNT-A treatment in the forehead and glabellar lines 18 months ago in my clinic. He was previously very satisfied with the result, stating that he achieved a very natural result that made him look younger and more relaxed. His concerns and expectations were discussed in detail during the first consultation. The patient’s main concern was the risks of elevating the eyebrow and ‘looking feminine’. During his second consultation he specifically asked for the same results as before. Figure 1 and 2 shows the patient before the second treatment took place. The upper face was reassessed, and we discussed the risks, down-time and possible side effects. The before and after photographs were taken and the patient had the opportunity to ask questions and to consider alternative treatments prior to signing the consent forms.

I used a 0.3ml Becton Dickinson syringe with a 31 gauge, 8mm needle for injection. BoNT-A was used, injected intramuscularly into the central glabella, and very superficially (subcutaneously) in the lateral part of the glabella, frontalis and orbicularis oculi muscle. I use the on-label recommendation for reconstitution volume of 2.5ml of 0.9% saline with preservative (benzoic acid) for 100 units vial of BoNT-A (4U/0.1ml), of which my preferred product of choice was Botox.15 The numbers shown in Figure 3 represent the location of injection and corresponding numbers of international units of BoNT-A used. Please note that due to natural facial asymmetry, there is a small imbalance in the location and number of units injected on each side of the face. Additional injections were made into the frontotemporal hairline, where the hairline recedes. The patient was followed up two weeks later and was extremely satisfied with the achieved results. Figure 4 and 5 show results of the treatment upon frowning and at rest, respectively. Note a minimal brow elevation on the right-hand side, despite additional correction for asymmetry in the primary treatment that was not noticed before by the patient. He was offered an additional one unit of BoNT-A into the lateral frontalis muscle on the right-hand side with a satisfactory outcome. No further follow-ups were required.

Men are becoming more aware of the cosmetic use of BoNT-A and are more frequently seeking those treatments. They require a different approach, beginning from the initial consultation. Male patients should be assured that the treating practitioner is aware of the sexual dimorphism. For optimal results muscle movement will be preserved to achieve a natural look. Currently there is limited amount of data on using BoNT-A in men and I believe that this growing area of aesthetic practice requires further studies.