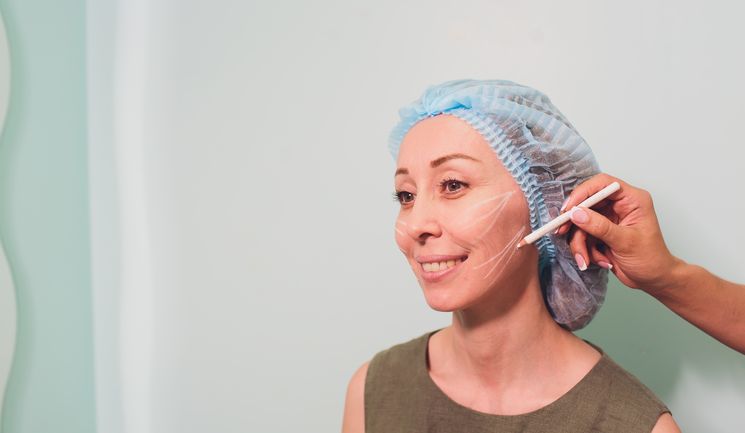 One of the main demands of patients seeking cosmetic treatments is to achieve a lift. The drooping of cheeks results in formation of nasolabial folds, marionette lines and jowls which contribute to the ageing look. A lot of cosmetic treatments aim to tighten, pull and lift these to provide a youthful appearance. The use of polydioxanone (PDO) and poly-L-lactic acid (PLLA) threads is a common treatment approach that aims to offer a non-surgical facelift. In this article, I share two case studies to demonstrate the use of silicone-based permanent threads to achieve what I believe to be a greater lift that is longer lasting.

Permanent threads are different from absorbable threads. The latter usually rely on bio-stimulation rather than suspension and provide shorter-term results. The aim of permanent threads is to mimic connective tissue that has become slack over the years.

There are a number of practitioners who are hesitant to use permanent threads as they believe that permanent products cause permanent problems. However, the literature suggests that this is not necessarily true. A multi-centric study, performed in 2010 by Somerefs with 110 patients whose results corroborate those of international literature, showed that serious complications from permanent suspension threads are not common.1

The main complications of this procedure are infection, persistent pain, spontaneous extrusion of thread, visibility of the implanted thread and psychological problems, which are all correctable. Infection to the skin is treated with antibiotics such as flucloxacillin or clarithromycin. However, on the rare occasion that the thread itself is the source of infection, it must be surgically removed and antibiotics used to clear the remaining infection.4 Removal of the thread is performed by injecting local anaesthesia along the path of the thread. A small lancet is used to open the skin and a Willis or Muller is used to catch the thread and pull it out, while massaging the skin to release the notches of the thread. This allows it to be removed in its entirety without breakage and without scaring.2

Persistent pain can arise around the temples if the thread crosses over the temporal branch of the facial nerve. If analgesics alone are not effective, a subcutaneous separation may be needed under local anaesthesia. In rare circumstances, thread removal may be needed. On occasion, the thread may migrate and protrude from the skin. In these cases, the thread can be easily removed by pulling it under local anaesthesia. If the thread is implanted too superficially or pulled too tight, it can be visible. A superficial thread would need removal and to be replanted. If the skin is under too much tension due to being pulled too tight, this tension can be release by simply massaging the area, as long as it is done within two weeks of the procedure before any fibrosis sets in. The dimpling of the tense skin can be disguised using hyaluronic acid filler.2

As with any treatment, patient selection is important. This treatment is suitable for patients who don’t want surgical lifting or have had a surgical lift previously with results starting to fade. I have found that the permanent thread works well for moderate ptosis with good skin quality. In my experience, it is best avoided in patients with severe ptosis, heavy tissue and extremely wrinkled skin. As with other threadlifting procedures, the usual contraindications of pregnancy, breast-feeding, isotretinoin and anticoagulants apply.

Finally, the psychological impact of any cosmetic treatment needs to be appreciated. Sometimes, even if the result appears good to the practitioner and other people, the patient may find it difficult to adjust to the new, albeit improved, look and may consider it as a disfigurement. The fragile psyche is best judged pre-treatment during the consultation process. It is important to offer removal of the thread to empower the patient. The use of before and after pictures and explanation in a calm manner can help reduce anxiety.

There are around five main permanent suspension threads on the market.2 These mostly use long needles, contain bi-directional notches, and are made of polypropylene.2 My product of choice is Spring Thread.

It is a flexible and elastic thread that is 300mm in length with long blunt-end needles at each end and contains 24 tiny cogs per cm that point in four directions.3 The thread has similar elasticity as skin of around 20%, allowing it to move with facial expressions.3 The thread suspends the underlying skin tissue, thus lifting sagging skin.

It is made from silicone-coated polyester,2 which is an inert biocompatible material that is readily accepted by the body. The thread remains in the skin permanently, increasing the longevity of the results and, as fibrosis forms around it, produces excellent fixation and collagen regeneration for several months, which means that results continue to improve after implanatation.1,4 The overall results last more than three years1,4 and with advanced techniques involving undermining and anchoring to the periosteum, the results can extend to five years, after which further threads can be implanted.1,4 This is a simple procedure that takes around two hours of clinic time, but around 30 minutes for actual insertion.

A 63-year-old patient (Patient 1) with no significant past medical history presented to clinic. Her main complaint was sagging skin, forming jowls, nasolabial and marionette folds. She did not have much volume loss and her skin quality was good. She felt that facial heaviness in her lower face that made her appear older and tired and wanted the folds lifted up. During her consultation we established that permanent threads would be the best treatment option for her because she wanted tissue lifting, without the risks associated with a surgical facelift.

There are several techniques used to implant these particular threads.5 The one used for Patient 1 is the basic straight lay technique which would give longevity of three years.5 The skin and scalp were prepared using a disinfectant (Inadine and Clinisept+). Three entry points were marked 5mm apart over the zygomatic process of the temporal bone. The path of each thread was drawn using a permanent marker from the entry point to the exit point in the lower face. The thread from the most anterior entry point exited anterior to the nasolabial fold on the upper lip, the thread from the middle entry point exited in front of the marionette fold under the lower lip, and the most posterior thread exited in the jowl under the mandible (exemplified in Figure 1).

The blunt needle attached to the thread was inserted perpendicularly at the entry point to a depth of 2-3mm. It was then turned to be parallel to the skin in the subcutaneous fat layer. It was advanced towards the exit point in the lower face. A 21 gauge needle was used to puncture the exit point. The blunt needle was then advanced through this. The other end of the thread was advanced with the blunt needle and exited in the scalp at least 5cm away from the entry point. Once all six threads were placed, each thread was tightened by first pulling the end at the lower face, with counter traction applied to the cheek. Then the scalp end was pulled anchoring it into place. Six threads were used in total, with three on each side. A slight over-correction was left in place in the form of skin bunching anterior to the ear, which will resolve itself over two weeks and the initial over-correction allows maximum lift to be achieved. The thread ends were cut flush with the skin.

The patient was advised to use paracetamol and ibuprofen to help with discomfort. She was asked to return in five days, at which point she felt that her left side was over-stretched. I released the tension by gently massaging over the cheek until clicking was felt and the skin appeared relaxed. In my experience, any correction is best done in the first week before fibrosis starts, so it is important to see the patient during this time. She was then seen again 14 days post treatment to check for any infection or delayed healing. No intervention was needed at that time. The patient was really pleased with the result and felt that she looked more youthful and less tired.

The patient had a good result from the procedure with improvement of the nasolabial fold, mouth corner, marionette area and the jowl. She maintained a natural appearance without signs of over tension. The repositioning of the skin also helped improve the tear trough area and produced more definition around the cheeks.

A 47-year-old man with no significant past medical history presented to clinic. He felt that his mid and lower face heaviness aged him and gave him a grumpy look. He had previously had dermal fillers injected for cheek volume. The patient wanted to look good for his age, with the lower face jowls pulled back, and sought a procedure that enabled him to return to work in a week. He did not want to undergo surgery or general anaesthesia. He wanted lifting of the lower and mid-face that would last a few years.

The same procedure as Patient 1 was used; a total of six permanent threads were place with three on each side. I was able to apply a good amount of tension to the threads compared to Patient 1, without formation of skin folds at the ears. This was due to the firm nature of the male skin compare to a female.

The patient was seen at day five for review and no adjustment was needed. He was then seen at day 14 when the post-procedure pictures were taken. The patient was very happy with his appearance and felt that it had taken 10 years off his age. He stated that the result was far greater than he had expected, especially given the fast procedure and recovery time.

The patient had a great result. He had a slight improvement in the nasolabial fold but a much greater lift around the marionette and jowls. The natural look of the face was maintained without an over stretched appearance.

Permanent threads can help to fill the gap between the dissolving PDO/PLLA threads and surgical facelift. The procedure can be performed under local anaesthetic, has a low downtime, the lift produced is substantial and the results can last three to five years. I find that the procedure is well tolerated by patients and the basic straight lay technique is easy to master. The risk profile is broadly similar to PDO and PLLA. In my experience, the two biggest factors that stand it apart from dissolving threads is the longevity and the amount of lift achieved. I believe that more detailed peer-reviewed studies with a large cohort of patients are needed to further substantiate these findings.