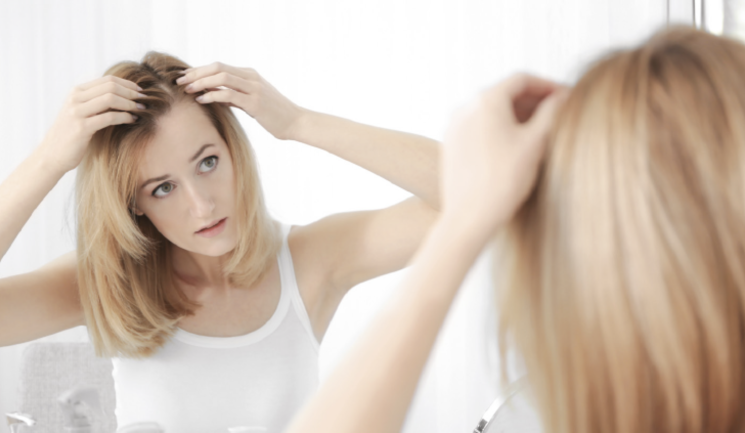 More than 30% of the population suffers from alopecia1 and there are a number of treatments available on the market for this.

Some of the most popular include hormone rebalancing, vitamins and supplements, antifungals and antiparasitic, prostaglandin analogues and antihypertensive vasodilators and 5-alpha-reductase (5AR) inhibitors. Other treatments such as hair implants, infrared devices and corticosteroid injections are also an option. I believe that despite the treatment approach, all should be supported with the use of topical solutions. It is important to note, however that topicals shouldn’t be used when the skin is broken, such as during hair transplant surgery. In this article, I explore the topical treatments available to attain the best results for common causes of hair loss.

Hair growth occurs in a series of stages, starting with the anagen phase. During this period, cell division in the matrix of the hair bulb, which forms the base of the hair follicle, produces keratinocytes and these form the various layers of the individual hair shaft. Melanocytes in the hair bulb provide the keratinocyte with pigment. After the hair reaches a certain length, which varies depending on the body region, it enters the catagen phase, when cell division and pigmentation cease.2 During the telogen phase, a new follicle appears below the original follicle, the hair shaft grows back into the original follicle, and the previous hair shaft is shed. It is the dysfunctions during the telogen and anagen stages that appear to result in hair loss.2

Causes of alopecia, specifically androgenic alopecia, can be down to a number of factors including seasonal variation, ageing, nutritional factors, hormone imbalances, autoimmune hair disorders, mutation of the hairless gene, inflammatory hair loss and psychological factors. Seasonal variations such as length of day, and even jet lag, invoke changes in the level of certain hormones, while lower levels of melatonin and prolactin will lead to shorter hair.3 As well as this, ageing leads to a reduction in density and decreased growth rate of anagen hairs, which typically begins around 30 years old but it might begin before, depending on the type of alopecia.4 There are three main types of alopecia that might be treated with the below topical ingredients:

Androgenic alopecia: a common cosmetic hair disorder, resulting from interplay of genetic, endocrine, and ageing factors leading to a patterned follicular miniaturisation. Microinflammation seems to be a potential active player in this process.5

Alopecia areata: most investigators agree that, although there are hardly any reported symptoms of inflammation, microscopic inflammatory changes seem to play an important role in alopecia areata. Hair loss of an isolated, asymptomatic area seems to be because of a circumscribed plaque (a lesion), usually on the scalp. Progress is often very unpredictable in many patients and the patch can expand or regrow in a few months.6 This benign form of plaque may develop gradually into more severe ones, eventuating sometimes in universal alopecia.6

Telogen effluvium: may begin at any age with a sudden increase in hair loss and maintenance of the frontal hair density. Surgery, fever, childbirth, iron deficiency, stress, chronic diseases, and dietary changes are factors commonly associated with the disorder.7 A time interval of two to three months between the triggering factor and the onset of the disorder is most commonly observed, and it lasts from four to six months in its acute forms. It is suggested that early entrance in the telogen phase is triggered by the inciting event, causing the habitual asynchrony in normal hair loss to go through a synchronic shedding period.7

Although the aetiology for the condition is complex, there is much one can do to seek improvement. The first step in the process is to go through a complete assessment. In this step, photographs to document progression can be useful. The second step is to determine whether immediate medical evaluation is necessary, which could include alopecia associated with redness and inflamed skin. Biopsies for evaluation of inflammation, bacterial, fungal or parasitic infections is essential to eradicate any serious underlying medical conditions.8,9 If none of the causes seem to be related, then hormonal imbalance and nutritional deficits should be ruled out and wider health examinations and behavioural observations undertaken, being cognisant that hair loss can result from several causative factors working together.

I believe that despite the treatment approach, all should be supported with the use of topical solutions

Alopecia areata and androgenic can be treated using topical application of certain medication such as hormones, spironolactone, finasteride, latanoprost, and minoxidil, amongst others. Research has shown the efficacy of oestradiol and progesterone when applied topically on the scalp, discussed in more detail below.9,10 Working with physiological doses and local application reduces risks associated with treatments. It is also believed that when applied topically using the right vehicle, the below ingredients might have a reduced systemic absorption,11 thus reducing the amount of side effects from the ingredients but having a more desired localised effect. As noted below, there is little research on the use of topicals and many of the studies are either conducted on very small sample sizes or more than ten years old. It is therefore fair to say that more research needs to be done in this area. How long each topical should be applied for is generally dependent on each individual product and patient using it. Commonly, each topical discussed treats androgenic alopecia and areata.

Oestradiol inhibits the conversion of testosterone to the metabolite dihydrotestosterone (DHT) by suppressing 5AR activity.12 In addition, by inhibiting 17β-dehydrogenase, it impedes the conversion process of androstenedione to testosterone, resulting in a reduction in the synthesis of testosterone and DHT.12 DHT is believed to be the main cause of pattern hair loss in both men and women. As well as this, it accelerates the conversion of testosterone to oestradiol by stimulating aromatase, decreasing the level of testosterone and leading to a reduction in DHT. The drug has been reported to stimulate the generation of hair follicular matrix cells.12 One study conducted in 2012 showed positive effects on 53 women with female pattern hair loss. Subjects applied the topical for eight months and results showed a significant result in hair count and diameter.13 I have found that the most common topical oestradiol is 0.025%.

Progesterone is a natural inhibitor of 5AR,14 which is an enzyme that converts testosterone into DHT. Without the presence of progesterone (or with not enough), 5AR can perform its converting activities. This means more DHT is produced, triggering further hair thinning and loss in those with androgenic alopecia. For example, a study conducted in 1987 saw 10 male patients suffering with androgenetic alopecia treated over one year with a lotion containing 1% hydroxyprogesterone. After treatment, patients saw an increase in the number and mean hair shaft diameter of anagen hair roots.11 In my experience, the most common strength of progesterone to be applied topically is around 2%.

Spironolactone acts as an androgen antagonist by competitively blocking androgen receptors, as well as inhibiting ovarian androgen production.15,16 One particular study conducted in 1988 saw six healthy male patients use a topical spironolactone to a well-defined skin area. It concluded that the product worked to a local effect without much systemic absorption.17 However, as this was such a small sample size, I think that it is fair to say that much more research is needed. I have found that the most common strength used is between 1-3%.

Finasteride works by inhibiting 5AR II enzyme, which is responsible for catalysing the conversion of testosterone to the much more active chemical DHT.14 A study of 24 healthy males conducted in 2014 evaluated a newly developed finasteride 0.25% topical solution, in comparison to the marketed finasteride 1mg tablet, looking at the movement of drugs within the body and suppressive effects on plasma DHT. It concluded that a strong and similar inhibition of plasma DHT was found after one week of treatment with both the topical and tablet, albeit finasteride plasma exposure was significantly lower with the topical than with the oral product.18 As oral finasteride is associated with a number of risks and side effects, this study suggests that use of topical finasteride could be particularly beneficial.

In 2012, a double-blind scientific study found that latanoprost, a drug that mimics naturally-derived compound molecules called prostaglandins, significantly increases hair density (by 22%) on the scalp after 24 weeks of treatment in young men with mild hair loss.19 While the sample size of the study was small (only 16 subjects), the researchers found that 50% of the subjects had significant differences in hair density in regards to increased hair pigmentation and thickness. Another interesting finding is that the proportion of hairs in the anagen phase versus the telogen phase remained stable. The strength used, and generally most common in my experience, is 0.005%. Latanoprost has also been used to treat eyelash alopecia at 0.005%.20

Minoxidil topical hair loss treatment has been used since the 1990s to treat baldness in men and women. The mechanism of action is complicated, but its role is known as a vasodilator, increasing the blood flow and nutrient uptake for the hair follicles causing follicles in the telogen phase to shed, which, as discussed above, are then replaced by thicker hairs in a new anagen phase. It is a recognised safe and effective treatment by itself if used during the early onset of alopecia.21 It was reported in one study that topical minoxidil normalises hair follicles and increases blood flow to the scalp, although clinical trial results are varied.22 In my experience, the most common strengths of minoxidil used are 2% and 5%.

Practitioners should be treating hair loss like any other condition, diagnosing and treating in a professional manner

Practitioners should be treating hair loss like any other condition, diagnosing and treating in a professional manner. Once the diagnose has been established, the treatment must be chosen carefully considering contraindications, cautions, interactions, side effects, allergies and medical history. Oestradiol or any hormone must be avoided when there is a family history of cancer, if the patient has been treated for cancer, or if they have had cancer.23,24 Hormones should be used with caution in male patients since there is a risk of gynaecomastia from scalp inunction of estradiol.25 Spironolactone has been shown to be safe when applied topically however the potential for oestrogen-dependent malignancies when taken orally remains controversial, with possible links to certain types of cancer.26 However, many believe there is not sufficient evidence to suggest spironolactone has a direct causal link to the development of breast cancer.26,27 There is not enough evidence to claim the safety of topical finasteride and within existing studies, side effects haven’t been discussed. There are a number of side effects reported through the use of oral finasteride including depression, erectile dysfunction and headaches however as we can see from the above study, the topical use appeared to be just as effective as the oral and could indicate promising however further research would need to be done.28 Latanoprost applied topically (or on the eyelashes) has no reported side effects, but it is advisable to avoid this treatment when glaucoma and herpes simplex keratitis is suspected.20 Lastly, it’s reported that topical minoxidil is contraindicated in pheochromocytoma and may cause a dry and flaky scalp with use. Although systemic effect is rare through topical application, this can be compromised if the skin is irritated or sunburnt.29

Topical solutions, especially when used in combination with other treatments, can be effective when treating different types of alopecia, especially androgenic alopecia and areata. It is important to take a full medical history to ensure that there are no underlying medical conditions resulting in hair loss, however knowledge of topical ingredients for this concern is useful to be aware of for a condition that affects so many.