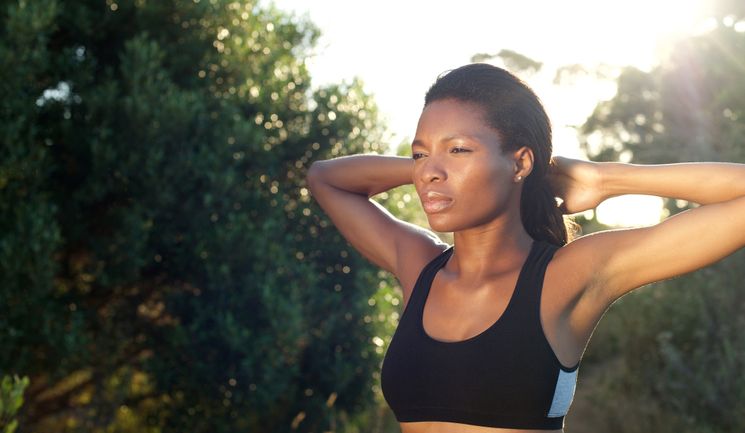 Ageing is commonly associated with structural deterioration of skin that compromises its barrier function, healing, and susceptibility to disease.

Much like other lifestyle and environmental factors, exercise or physical activity can impact an individual’s appearance.

As this article focuses on the impact of exercise on skin ageing, it is important to clearly define exercise. There is limited evidence on this topic, as supported by Saluja et al.1 Simioni et al. define physical activity as, ‘Any bodily movement produced by skeletal muscles that results in energy consumption’. They explain that exercise is a sub-category of physical activity and is characterised by being planned, structured, and consistent with the intention to improve or maintain one or more aspects of physical fitness.2

Hjerrild et al. discuss the involvement of advanced glycation end-products (AGE) in the progressive and irreversible changes of the ageing process.3 According to Crane et al., many studies indicate that these changes are driven largely by impaired tissue mitochondrial metabolism.4 Saluja et al.

AGEs are formed as a result of non-enzymatic reactions and they accumulate in molecules such as collagen, altering the structural components and resulting in tissue damage.1

Some AGEs are fluorescent, therefore glycation can be measured non-invasively using skin auto-fluorescence (SAF).3 Hjerrild et al. used SAF to investigate the effect of regular long-term exercise and diet on glycation. They used a sample of 194 Danish males between ages of 19-41 years, who trained at least twice a week for 10 years. Their results were compared to 34 sedentary Danish males who had not carried out regular exercise for 10 years. Their findings demonstrated that SAF increased with age (p<0.0001) and decreased with training years (p=0.041).3

Unexpectedly, it was determined that there was no difference in SAF between the athletes and controls, however, more training experience was independently associated with lower SAF, thus lower glycation. Following analysis, the researchers suggested that an active year contributed 18% less SAF than an inactive year, and that long-term exercise is required to impact SAF levels in skin.3

However, they did highlight limitations of their study. Even though current smokers were eliminated, 42 participants were ex-smokers which would increase SAF values. The control group was entirely of the Danish population and skin pigmentation was not taken into consideration, both of which would affect the SAF results.3

Crane et al. support findings by Simoni et al. that physical activity can bring about numerous health benefits, and discovered that endurance exercise attenuates age-related changes to skin in humans and mice.2,4 A sample of sedentary elderly adults of 65-86 years of age went on a 12-week endurance exercise training programme and the results showed an increase in collagen content, a reduction in stratum corneum thickness and, unexpectedly, a reduction in stratum spinosum thickness, all of which were found to be significant results (p<0.05).4

This was a surprising outcome as a previous cross-sectional cohort study by the group, for which details were not provided, showed a contrasting effect of exercise on the stratum spinosum. As such, the researchers believe that a longer intervention may promote more extensive remodelling, restoring stratum spinosum thickness.4

Saluja et al. have addressed that there is very limited scientific research available on the effect of exercise on skin ageing. However, they discuss a study of sedentary individuals, who exercise for less than an hour per week and active individuals, who do a minimum of four hours of high-intensity aerobic exercise weekly.1 A biopsy taken from each volunteer’s sun-protected buttock skin supports Crane et al.’s findings that the active individuals had significantly thinner stratum corneum and increased reticular dermis collagen content when compared with the sedentary individuals.4 A thicker reticular dermis is beneficial as this increases the support, elasticity and flexibility of the skin whereas, a thinner stratum corneum can accentuate signs of ageing.

Both groups of researchers identified exercise-stimulated hormone IL-15 as a regulator of mitochondrial function in ageing skin.1,4 It was found that IL-15 and exercise treatment resulted in higher stratum spinosum thickness and dermal collagen content in 23-month old mice compared with PBS-treated mice, which partially reversed the effects of ageing.4

They suggest that a reduction of IL-15, released from skeletal muscle and other tissues during sedentary living, is a causative factor that may be responsible for the accelerated degeneration of dermal fibroblasts, bringing about signs of skin ageing. They even suggest that low-dose IL-15 therapy may be considered a beneficial strategy to address skin ageing.4

Simioni et al. report that ageing and strenuous exercise increases oxidant production in muscle, and chronic exposure to high levels of reactive oxidative species (ROS) can become toxic, leading to impaired cellular function and macromolecule damage.2 However, within their literature review, they found that moderate exercise and an active lifestyle have been demonstrated to improve antioxidant defences and reduce lipid peroxidation levels. The exercise-induced ROS generation results in increased activity of enzymatic antioxidants, therefore an increased resistance to oxidative challenges.2

As per Simioni et al., the extent to which reactive species are helpful or harmful depends on the exercise duration, intensity, fitness status and diet of the individual. Therefore, excessive strenuous physical exercise is detrimental to untrained individuals, but progressive training allows for an adaptive response, enhanced function of the mitochondria and accumulation of smaller doses of ROS at a given intensity compared to the untrained individuals. The cells are able to detoxify a larger amount of ROS more easily, resulting in a rapid recovery of the oxidation, thus providing protection from oxidative damage.2

Saluja et al. discuss how oxidative stress affects different tissues that can bring about clinical signs of ageing.1 They found that recent studies have demonstrated that ROS affect bone homeostasis such that bone formation by osteoblasts is reduced, whereas osteoclast differentiation, thus bone resorption, are enhanced. This can be further exacerbated by gravity-induced mechanical-loading exercise on other aspects of the skeletal system, however the skull does not experience the same forces.1 Facial bone structure is affected, resulting in the lack of craniofacial skeletal support to overlying soft tissue which can further accentuate the nasolabial folds and the inferior displacement of the malar fat pad in the mid-face, volume loss in the perioral region upon mandibular and alveolar resorption in the lower face, and widening of the orbital socket, leading to the formation of the tear trough in the upper third of the face.1

Saluja et al. also mention associations with accelerated fat ageing and oxidative stress in adipocytes, resulting in fat loss. Loss of fat and migration of fat pads in any part of the face can exacerbate the ageing appearance.1 The reduction of bony and fat support will naturally affect the taut nature of the skin. Oxidative stress, which brings about over-expression of matrix metalloproteinases, will promote the degradation of collagen and elastin in the dermis, resulting in loss of elasticity, and will be clinically noticeable as saggy skin and rhytids. Saluja et al., explain that all these tissue and skeletal changes as a combination will contribute to the ‘inverted triangle’ ageing face.1

There is a general consensus within the data that suggests that moderate exercise within an active lifestyle is recommended, rather than episodes of strenuous activity. This is an interesting find as there will be many individuals who will not realise the impact this action will have on their skin and, in their effort to lose weight, may be accelerating the ageing process. I do believe there is limited evidence on this topic and further research in to how other factors, such as sun protection, hormones, gender, and type of physical activity may affect signs of ageing when exercising. I will be considering this evidence and incorporating it within the holistic care plans that I offer to my patients, in my attempt to promote physical conditioning, general wellbeing and healthier skin.