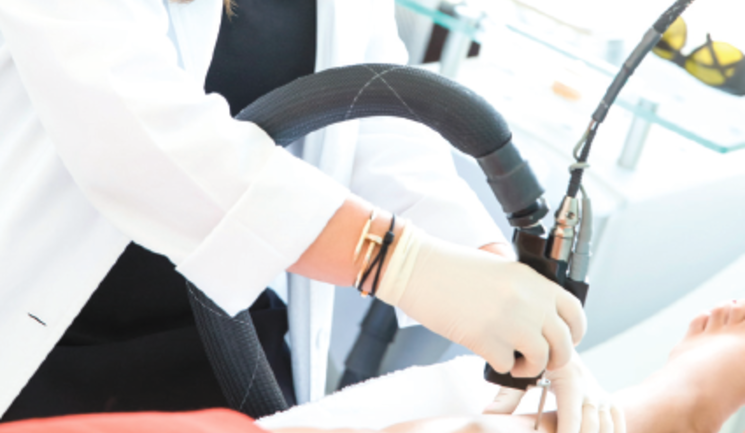 The potential issues associated with laser-generated plumes have been known since the 1960s when lasers were first applied to treat human tissue.1 ‘Plumes’ and ‘aerosols’ are collective names typically used to describe the air contaminants following laser and intense pulsed light (IPL) treatment of tissues. They include both combustion and non-combustion-generated products including tissue(s), gases, particulate materials, steam and carbonised material (smoke).2,3,4,5

Plumes are generated as a result of imparting high energy light onto tissues – regardless of which type of laser or IPL system is used. Even ‘non-ablative’ systems can induce plumes, and evidence indicates that standard clinical parameters are sufficient to generate potentially hazardous plumes. The evidence is quite clear – there is always some level of risk when using high energy lasers on tissues.1,2,3

The concern around plumes arising from laser/IPL treatments has been highlighted and presented as an issue in the US for five decades since it was first raised in 1967,1 yet it is rarely discussed here in the UK. Given the potential hazards such plumes may generate, especially in the current climate of COVID-19, I feel it is important to raise the awareness of this problem amongst all laser/IPL operators.

Clinical evidence through the decades

Concerns around laser/IPL plumes were first raised in 1967 by Hoye et. al. when they noticed airborne particulate matter following treatment of tumours with a Nd:YAG laser.1 At the time, there was no direct evidence that such plumes posed a health risk. Tomita et al. (1981) described the mutagenetic effects of viral particles in the plumes generated by both lasers and electrocauterisation, showing that the method of release of these hazardous particles into the atmosphere is not important.5

In 1988, Garden et. al. analysed the plume generated during CO2 laser irradiation of plantar and mosaic verrucae and found smoke, vapourised tissues, steam and particulates including some intact cells.2 Until this study it had been thought that this laser destroyed any viable tissues or viruses. In 1988, Garden found intact human papillomavirus (HPV) DNA in the plume in two out of seven patient treatments, using standard clinical laser parameters. They found that even with power densities of up to 38,200W/cm2 there was still evidence of intact viral DNA in the plume, regardless of the laser mode (pulsed, continuous, focused or de-focused). Clearly, the evidence shows that there is a real risk of cross-infection from plumes generated during laser procedures.

A report by Hallmo and Naess (1991) discusses a 44-year-old laser surgeon who presented with laryngeal papillomatosis with the conclusion that he had contracted the HPV virus from treatment of anogenital condylomas using a 100W Nd:YAG laser.6 This occurred even though he was wearing conventional masks, gloves and laser eye protection glasses. A ‘standard’ smoke evacuator was also used during the procedures.

A later study by Garden (2002) found viable bacteriophages, in addition to viable human immunodeficiency virus and HPV particles in laser plumes.3 Another study by Mihashi et al. showed that when the smoke extraction tip was moved only 2cm from the treatment area, up to 50% of the particulate matter escaped into the local environment.4

In addition to biological materials in electrosurgical plumes, other evidence indicates the presence of noxious chemicals. In 2003, Barret and Garber found benzene, butene, formaldehyde, hydrogen cyanide, phenol and many other substances in the plume following treatments such as electrocautery, ultrasonic scalpel tissue dissection and laser tissue ablation.8 Higgins presented an interesting report at the American Society for Laser Medicine and Surgery (ALSMS) Boston meeting in 2016 where she presented a similar list of noxious substances found in the plume following laser hair removal.9 Anyone who has been involved in the removal of hair using either laser or IPL systems can’t have failed to notice the strong smell of contaminants in the atmosphere.

A 2016 report by İlçe et al. detailed the hazards of exposure to plume arising from electrosurgery including headaches, coughing, nausea and drowsiness in 81 medical personnel.10

My own findings in 2018 showed that micron-sized particles of tattoo ink leave the skin at high velocity during laser treatments. While these ink fragments may not pose a biological threat in themselves, some of these particles fly through blood vessels, thereby potentially picking up contaminants in the blood.11 Although there has been no specific tests conducted, it is safe to assume that standard cotton surgical facemasks would not be effective in stopping these high-speed fragments.

With my assistance, and the support of Dr Godfrey Town, the British Medical Laser Association (BMLA) has released new guidance for COVID-19 titled ‘Clinical Guidance for Laser Procedures during the COVID-19 Pandemic’.12 This guidance highlights the importance of Personal Protective Equipment (PPE) to avoid contamination. The guidance states, ‘Until such time that evidence to the contrary is available, one could assume that the main route of COVID-19 infection in laser/IPL procedures remains patient-generated respiratory aerosol but still consider laser-generated plume/aerosol as potentially infective’. I recommend all practitioners become familiar with the new guidance.

The evidence clearly shows that laser/IPL plumes must be considered as a biohazard. Appropriate measures must, therefore, be taken to protect the laser/IPL operators and their patients. These include gloves, gowns or scrubs, appropriate masks, high flow rate suction systems with good filtration and proper training in their use.

Standard surgical masks have been found to effectively prevent transmission of particles larger than five microns in size.8 However, the US Occupational Safety and Health Administration clearly indicates that surgical masks used to prevent contamination of the patient are not certified for respiratory protection of medical employees.13 In other words, standard surgical masks may not be suitable personal protective equipment PPE against laser-generated plumes, in many cases.

Surgical masks are essentially disposable, lightweight paper tools designed to protect patients from caregivers. They are only effective for between three and eight hours and offer very little protection to the wearer against airborne infectious agents, such as viruses.14

Given the current COVID-19 pandemic we have all become aware of the wide variety of face masks available. However, it is important to understand which masks provide the correct level of protection against small air-borne particulates.

Surgical masks: these are medical devices designed to prevent transmission of water droplets from the wearer to the environment. These devices are tested for bacteria filtration in the direction of exhalation – from inside to the external environment.

Respirators: are disposable or re-useable medical devices tested in the direction of inspiration – from the outside environment to the wearer’s respiratory system. They are designed to minimise transmission of unwanted particulates, including bacteria and viruses, to the wearer’s respiratory system. They must be properly fitted to ensure efficiency. Note that some respirators come with an optional exhalation valve to reduce resistance to exhaled air (for the comfort of the wearer).13-16

Table 1: Standards for respirators in the EU and US.13-16

To protect the practitioner, well-fitting respirators that are at least FFP2 or N95 are required (or FFP3/N99 in areas of intense plumes or high viral loads).13-16

Use of appropriate smoke extraction equipment is critical and includes those with high-efficiency particulate absorbing (HEPA) filters. Such filters are designed to remove 99.97% of ‘particles’ larger than 0.3 microns from the air – according to the Standard EN 779:2012.18 They must also be properly used, otherwise it can give both patients and operators a false sense of security. HEPA filters can be cleaned but frequent changes of the filters should be carried out to ensure a sufficiently high suction flow rate.

The US has an established organisation called the International Council on Surgical Plume, which is a non-profit clinical advocacy organisation with a membership of more than 150,000 healthcare professionals and colleagues through professional societies and organisations.19 To help raise awareness to both patients and practitioners of the importance of measures to protect human health locally, myself and my colleague, Dr Z Adam Kader recently founded The UK Council for Surgical Plumes.20

It is a mandatory legal requirement for safety glasses to be worn by both practitioner and patient when using laser/IPL equipment.17 I believe that other PPE should also be mandatory for protection against laser/IPL plumes. Based on the evidence, it should be always be assumed that the laser/IPL plume is infectious with potentially dangerous viruses, and other pathogens, and appropriate measures should be taken to minimise cross-infections.

Note: This article has been repurposed from an upcoming book by Mike Murphy titled ‘Lasers & IPLs in Medicine and Aesthetics’. It is due to be published as an e-book in the near future.