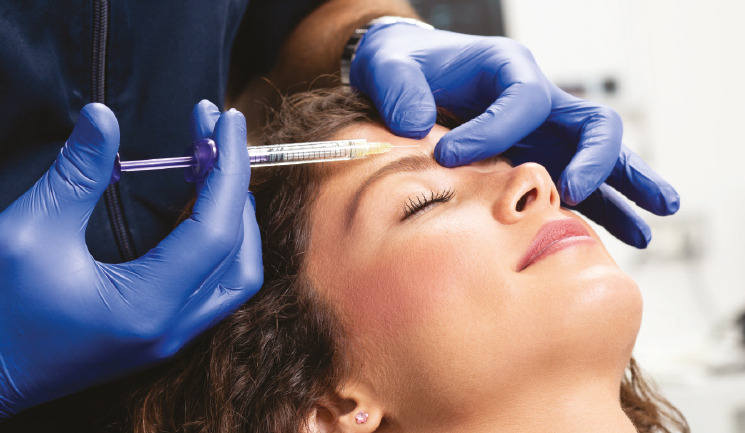 Botulinum toxin type A (BoNT-A) has been used since the 1970s,1 and these anti-wrinkle injections are one of the most popular cosmetic treatments in the world.2 With estimates of nearly seven million injections per year globally,3 it’s no wonder that the discussion surrounding BoNT-A resistance and concerns of its effectiveness, have become more prevalent. The issue of antibody-induced treatment failure is well-known in the therapeutic setting, but with more use cosmetically we are seeing more reports of resistance.4,5 At the time of writing, I have just had my first experience with a patient who seemed to be resistant to all FDA approved toxin brands, which were tried with no effect.

Firstly, to understand how/why resistance happens we must understand how botulinum toxin works. BoNT is composed of a core neurotoxic protein and nontoxic accessory proteins (NAPS) that have a light chain and a heavy chain. A normal vial of the neurotoxin will consist of 150kD that contains 100kD heavy chain (which helps bind the neurons) and a 50kD light chain that helps entry into the cell. These heavy and light chains are linked together by a disulfide bond.6

The NAPS contain hemagglutinin (50Kd) and non-hemagglutinin proteins (130kD) to help prevent the toxin from breaking down.7,8 NAPS vary in different brands, but most include albumin, sucrose, lactose, sodium chloride and disodium succinate.6 BoNT prevents the release of acetylcholine at the axon endings at the neuromuscular junction. It does this by affecting the SNARE (SNAP receptor) proteins that transport the acetylcholine and their docking with the presynaptic membrane, before it is released into synaptic cleft. BoNT-A and BoNT-B work differently, as BoNT-A works on the SNAP-25 protein and BoNT-B works on synaptobrevin, and impairing this process prevents acetylcholine from being released, therefore making it hard for the muscles to contract.6,8

Causes and categorisations of resistance

Resistance is defined as the process wherein the body forms an antibody response to a drug medication, or something that the body regards as foreign. An antibody response can happen because botulinum toxin is regarded as foreign by the host and therefore has the potential to induce an immune response, this then results in the production of antibodies.8 These antibodies block the pharmacological effects of the botulinum neurotoxin.9,10 There are two types of resistance to BoNT-A type A: primary and secondary.

Primary is where a patient has had a first-time treatment and has no response instantly, however this seems to be very rare, and there are a limited number of cases that have been reported.11 Whilst there is no evidence suggesting the main causes of primary failure, it is thought it may be caused by a cross-reaction of other antibodies such as tetanus toxin A, pre-existing antibodies to botulinum toxin, chronic exposure to botulinum in childhood, and abnormalities of BoNT-A acceptors.1 The main cause of this BoNT-A resistance currently identified in the literature is that the presence of a foreign protein in the body causes antigens to induce a biological immune response.9,12-14 Antibodies can block the pharmacologic effects of the botulinum toxin, which are known as neutralising antibodies, and some patients can lose their response to botulinum injections over a period of time.12,14 The antibodies that can cause resistance to botulinum toxin have not yet been defined, and immune responses can differ between patients.11,14

Secondary resistance is described as initial results/benefits from treatments followed by a decrease in effect or no effectiveness at a later treatment date. This is defined as being after two subsequent treatments of botulinum toxin treatment.11 The literature suggests that secondary resistance is likely to develop within the first year of treatment, and if it’s not seen after the first four years it is highly unlikely that it will develop.15 Currently, it is thought from the evidence that secondary resistance occurs due to NAPS, however the research is limited.16 It is thought that NAPS can act like an adjuvant in a vaccine which stimulate your immune system causing an antibody response, which makes resistance more likely. There is very little evidence at present for us to understand why some patients get resistance and some don’t, and much more research is needed to valid the current research which suggests that NAPS can cause antibodies to be produced.17 The existing evidence shows that the factors that may contribute to antibody formation include longer large doses, a shorter time period between injections and decreased purity of botulinum toxin preparation.18,19,20

Preliminary research in animals injected with IncobotulinumtoxinA suggests that BoNT-A, which has the absence of complexing proteins (proteins that have no therapeutic function and don’t influence the diffusion of neurotoxin),21,22 is indeed associated with reduced immunogenicity. A study involving cynomolgus monkeys that received repeated four-weekly injections with 4, 8, or 16 U/kg of IncobotulinumtoxinA or control group were not associated with the development of neutralising antibodies in any animal, despite clear evidence of biologic activity of the neurotoxin, which was more prominent in the highest dose group.23 However, this study lacked a positive control group, therefore more research and data is required to show that complexing proteins do indeed result in antibodies forming. A recent cross-sectional study in humans contained 59 patients that had exclusively been treated with IncobotulinumtoxinA (mono group) and 32 patients having been treated with other BoNT-A preparations less than nine times, who were then switched to at least 14 sessions of IncobotulinumtoxinA treatment (switch group). The study checked for the prevalence of neutralising antibodies, and was tested by means of the mouse hemi-diaphragm assay (MHDA). The study found that none of the patients in the mono and only two in the switch group had a positive MHDA-test, suggesting that there’s an association between neurotoxin (complex) protein load and neutralising antibody formation.24

The study concluded that to reduce the risk of antibodies forming, a toxin with the lowest amount of complex proteins should be used.25 Research shows that in addition to selecting a low-risk antigen to reduce the risk of antibodies developing, we should wait at least three months in-between treatments and use the lowest most effective dose.8,26 There have been multiple studies that have shown higher rates of resistance linked to treatments where patients have had higher therapeutic doses, such as in 22 patients with cervical dystonia or oromandibular dystonia who developed resistance and were found to have NAPS. This showed that the mean dose per visit and the dose of BoNT-A were significantly larger than those without NAPS, showing a link between developing NAPS and high doses of BoNT.19 Another study involving 616 patients receiving BoNT-A for cervical dystonia of which nine patients had NAPS, showed a link between those receiving higher doses at shorter treatment intervals. It also showed that patients who were reinjected within six weeks were more likely to develop NAPS.20 In cosmetic use this could validate why the evidence shows that resistance to botulinum toxin is less common in patients who receive BoNT-A at lower doses.

A recent systematic review was carried out using 43 studies, including 8,833 patients being treated with all available toxins on the UK market. The research showed that the number of patients with NAPS was 1.8% and there was a slight increase related to the duration the patient had been receiving BoNT-A. Those being treated for medical conditions using high doses was shown with the highest incidence of NAPS. Patients being treated with Abobotulinumtoxin-A were shown to have the most incidence of NAPs (7.4%) whilst Incobotulinumtoxin-A and Onabotulinumtoxin-A were shown to have a rate of 0.3%. The study concluded that whilst NAPS following BoNT-A is relatively low, there is limited evidence on what can cause a secondary response.27

With the risk of BoNT-A resistance, albeit small, it’s important to know what alternative treatments we can offer to our patients should the problem arise. Currently there is limited evidence for determining if antibodies disappear over time and whether as medical practitioners we should reinject or not. According to the literature, it is however important that the quality of the botulinum toxin used is neurotoxin free of complexing proteins with low antigenicity, to prevent a resistance happening again.28

Although there are no current guidelines, it is recommended in the literature that patients who develop immunoresistance to BoNT-A can be treated with higher doses or by trying different brands, although there is debate around whether complex proteins are a help or a hindrance for the BoNT-A molecule.9 If there are no changes after trying an alternative brand, another alternative could be to try botulinum toxin type B (BoNT-B). The only commercially available BoNT-B drug available in the UK is RimabotulinumtoxinB (Neurobloc), but is indicated only for the treatment of cervical dystonia (torticollis) in adults.11 In terms of secondary resistance, a recent study containing 36 patients who had cervical dystonia (involuntary muscle contractions in the neck) and a secondary non-response to BoNT-A showed that 36% of the trial patients had a good clinical response to Neurobloc. The other 23 patients either had no response, a poor response, or side effects and stopped treatment. Another study containing 20 patients that were resistant to BoNT-A showed that seven of these patients showed some response to type B.29 These findings show that BoNT-B may have a place as an alternative treatment for patients who have have become resistant to type A, but overall the research shows that BoNT-B has no guarantee for an effective treatment.29

There is some guidance from the British Neurotoxin Network30 in 2016, which recommends distinguishing no response to the toxin and then considering a dose revision. Where resistance is identified it recommends a switch to BoNT-B or a treatment break. This guidance is not specific to cosmetic treatments or primary causes.30 Another paper discusses the association between secondary botulinum toxin treatment failure in cosmetic indication and anti-complexing protein antibody production, and proposes a protocol for the treatment of patients who are suspected to have resistance to BoNT-A.31 The protocol recommends that instead of switching brands, all practitioners should stop injecting BoNT-A for at least six months to prevent further antibody production or immune responses.31 Practitioners may also use other aesthetic treatments such as cosmeceuticals to help prevent wrinkles and skin tightening treatments using energy-based devices.

From the current literature it is easy to see that there is limited evidence to support how common resistance to BoNT-A is and why it happens. However, based on the research available there is a small amount of evidence that shows resistance may be linked to complex proteins. Until there is more clinical evidence it is wise to follow best treatment guidelines by using the lowest most effective dose and to have intervals of at least 12 weeks. In future, we need more long-term clinical studies to follow up patients and to understand the causes of botulinum toxin resistance and how we can treat them.