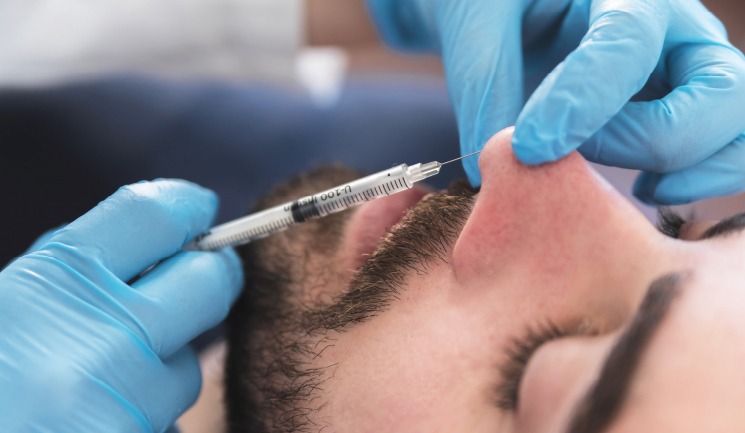 There has been a decline in the number of people undergoing surgical rhinoplasties.1 At the same time, an increasing number of patients are undergoing non-surgical rhinoplasty (NSR) annually.2 Although appearing to be non-invasive, the NSR comes with a significant risk. This article will outline relevant nose anatomy, and the valuable role of ultrasound in the prevention and management of vascular complications in the nose.

A comprehensive understanding of relevant anatomy is key to a safe non-surgical augmentation using filler.

The vascular supply of the nose is usually found superficial to the musculature.

Defining safe zones and danger zones for injections in the nose is not possible, as the vascular anatomy of patients can have variable anastomoses.6 The dorsal nasal artery (DNA) usually runs superficial to the muscle layer of the bony nose, then runs inferolaterally along the dorsum of the nose, and underneath the muscular layer and as it reaches the cartilaginous region.3 However, variability of DNA has been observed, for example the paired dorsal nasal arteries sometimes run over the midline. In fact, it has been found that 26% of people have a dorsal nasal artery that courses through the nasal midline rather than either side of the midline.7

In addition, although there is usually a five-layer arrangement in the nose, layers can be absent in the radix and nasal tip. The nasal arteries have been found at varying depths and within different layers of the nose. In 2021, Alfertshofer et al. found that the nasal arteries coursed superficially in 91.7% of all cases in the nasal radix, in 80% in the mid-nasal dorsum, and in 98.3% in the nasal tip. This translates to 1.7% of vessels lying submucosally in the nasal tip, and 8.3% submucosally at the radix.2 These anatomical variations serve to remind clinicians that there is no universal safe zone.

A serious complication of non-surgical nose augmentation is vascular occlusion (VO), whereby arterial obstruction causes a restriction of oxygenated blood to tissues, leading to necrosis if untreated or poorly managed, the result of which may vary from mild scarring to visible disfigurement. Evidence shows that the areas with the highest incidence of vascular occlusion are the glabellar region, nasolabial fold, alar triangle and nasal tip.8 The reason the nasal tip and alar are commonly affected is because they are supplied by an end artery with limited collateral blood flow.8 If conservative measures to resolve the occlusion have failed, urgent dissolving of obstructive filler is needed to resume adequate blood flow to deprived tissue.8

Albeit rare, the most serious potential complication of NSR is permanent visual loss, believed to be a result of emboli after inadvertent injection into a vessel lumen in the nasal region leading to ischaemia of the retina.9 One study showed that most reported cases of visual loss were from the nasal region (56.3%) with hyaluronic acid (HA) filler as the cause of visual loss in most cases (81.3%). According to the authors of the study, HA volumes of 0.2ml can cause permanent vision loss, but this does not mean that a lower volume could not also have an effect.10,11

The role of ultrasound

Our first goal as clinicians is in preventing vascular compromise, as, despite our knowledge of mainstream anatomy, it is acknowledged that there can be variations in the course of a blood vessel. Ultrasound scanning (USS) is the least invasive method to visualise tissues underneath the skin. Doppler ultrasound (DUP) is being considered as the first-line method for imaging in cosmetic medicine.7 USS can be used for vascular mapping before – or to guide injections during – filler placement in order to prevent intravascular injection.12

With sufficient training, USS also makes the prevention and management of complications more predictable, as DUP can identify the location, depth and course of veins and arteries and evaluate blood flow, vessel location, and locate VOs. In the case of a VO, it is possible to visualise the precise depth and location of problematic filler by assessing the area of disrupted blood flow and then targeting with hyaluronidase under ultrasound guidance.12 Ultrasound frequencies in facial imaging range up to approximately 20MHz. The frequency directly relates to the depth of scanning and the image quality. The higher the frequency, the shallower the scan depth. The higher the frequency the better the image resolution. High frequency scanners are used for superficial structures, such as the face/nose where scanning is not required beyond a 4cm depth, to provide good resolution.12

Vascular mapping in the nose

Ultrasonographic interpretation requires knowledge of anatomy and an understanding of the echogenicity of tissues, in order to distinguish layers accurately. This is vital to identify the location of a blood vessel. Assessing the pulse on Doppler mode helps to distinguish vessels, and depth measurements can also be made.

Here, I present a case showing vascular mapping of the nose area prior to filler injection. As shown in the images, in the nasal tip, I observed blood vessels in the deep layers at close proximity to nasal cartilage layer, where filler is often deposited. In this case, I avoided injection in the nasal tip due to the risk of vascular injury. Instead, I injected her radix only.

I have also observed deep vessels in the radix, coursing deep through the fibromuscular layer at proximity to the periosteum. In these cases, after discussion with the patients, I avoided injection of the radix due to the vessel position, but did inject the nasal tip after vascular mapping.

In addition to vascular mapping, ultrasound-guided filler injections can be performed to add an additional layer of precaution. This is where filler is deposited at the same time as ultrasound scanning in Doppler mode to allow visualisation of a cannula (or needle) to further ensure filler deposition is away from vessels. This is an acquired skill, involving a high level of manual dexterity, precision and practice. This skill can be learnt on a facial ultrasound course for injectables provided the training includes a demonstration and some form of practice of this technique. Thereafter, a commitment to regular practice in clinic would be needed.

In the case of a VO without ultrasound, reversal can be successful after use of the ACE Group World High-dose, Pulsed Hyaluronidase Protocol which involves repeated injection of relatively high doses of hyaluronidase, not only where the filler was injected but into the entire area of compromised tissue. This is repeated every hour until clinical resolution is observed, through reassessment of the skin.8

Doppler ultrasound enables assessment of vascular branches to allow direct injection into the area of obstruction. Guided hyaluronidase injection techniques are more precise, allowing real-time assessments of blood flow throughout treatment, indicating either success or the need for further dissolving.11

When an unusually complicated VO occurs, this can be challenging to resolve despite high hyaluronidase volumes. For example, the nasal septum may be at risk of necrosis without external skin changes.12 In the case of ischemic internal tissues like this, monitoring for perfusion during dissolving may not be straightforward due to the lack of skin involvement. From my experience, in such cases, restoration of blood flow can be seen on Doppler ultrasound as an indicator of resolution.14

Filler injection in the nose carries the highest risk for permanent blindness than any other region in the face. The safety of non-surgical rhinoplasty is enhanced by a sound understanding of layered nasal anatomy with special attention to the depth and location of the main vessels, along with using as many precautions as possible to decrease the risk of vascular injury. There are anatomical variations in the nasal vasculature. Ultrasound provides an additional layer of precaution to filler injections in the nose through vascular mapping or ultrasound-guided injections. Thorough understanding of facial anatomy is essential in order to scan successfully, and skilful scanning and interpretation comes with ultrasound training and experience.