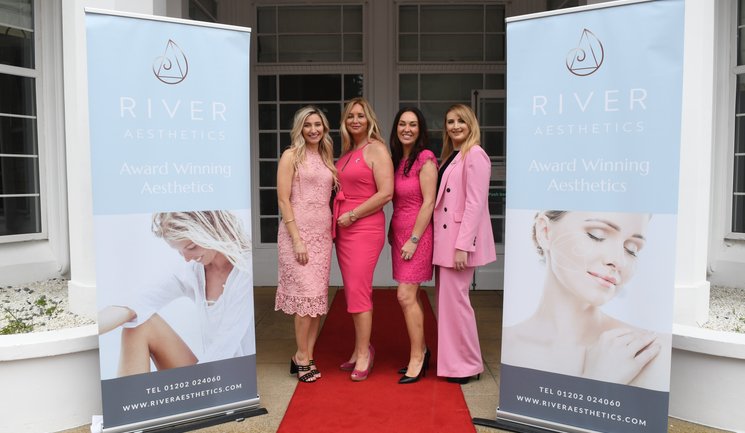 On May 1, River Aesthetics, co-founded by Dr Victoria Manning and Dr Charlotte Woodward, hosted a lunch for 80 women to raise money for some of the UK’s breast cancer charities through The Pink Ribbon Foundation.

The lunch took place at the Haven Hotel in Sandbanks, Dorset and guests were inspired by talks from TV personality Anthea Turner, one of The Pink Ribbon Foundation’s patrons, and Lisa Allen, the charity’s head of fundraising. They were also joined by business owner Kirsty Ettrick, who shared her story about the motivation for the launch of London Medical Concierge following the premature death of her husband.

Throughout the event, a range of prizes were auctioned or raffled and The Pink Ribbon Foundation also sold bejewelled Pink Ribbon badges, and guests queued and made a donation to have their photos taken with Anthea Turner.

The final amount raised was matched by Barclays Bank, bringing the total to £10,784.32. River Aesthetics also confirmed that for every River Gold Facial performed at its flagship practice in Canford Cliffs 10% of the earnings will be donated to the charity.

Dr Manning said of the event, “We were delighted to have raised the sum of £10,782.32 for The Pink Ribbon Foundation. The event was a great success and we have had really positive feedback from attendees. As female doctors, in an all-women team with a strong interest in women’s health, partnering with the charity fits perfectly with our philosophy. On a personal level, we feel strongly drawn to the charity as both our mothers have experienced breast cancer.”