Breaking the Stigma for Male Treatments 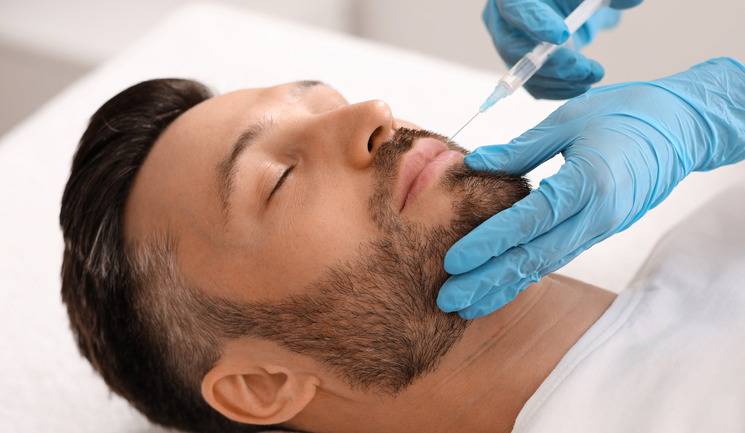 Practitioners explore the reasons why men are afraid to attend aesthetic clinics, and how the industry can combat the stigma

The interest in male aesthetic treatments is on the rise, with almost two million men in Britain now considering getting a cosmetic treatment.1

While this seems positive, recent statistics produced by digital consultation platform Étre Vous have indicated that almost half of the 600 men surveyed feel uncomfortable visiting an aesthetic clinic for advice, and over 60% of men prefer to speak to doctors online about aesthetic treatments to avoid having to go into a clinic.2 These results suggest that it’s not the treatments themselves which men are afraid of, but rather the clinic environment.

Why is there a stigma?

Dr Abraham believes that the problem lies in society viewing aesthetic treatments as stereotypically feminine, stating, “It’s a deeper problem than we think – it’s to do with masculinity in society as a whole. When something is presented to us as being for females, men don’t want to go near it or investigate. With aesthetics being viewed as a predominantly female thing, men don’t want to seem less masculine by dipping their toes into the pool. So, it’s something they either avoid or don’t want other people to know they’re having done.”

He continues, “I have had male patients ask me not to mention to anyone that they’ve been in for a procedure. Of course I would never do this anyway due to patient confidentiality, but it just shows they have a real fear of anyone finding out. I find that this is more for lip or cheek injections, as they’re typically viewed as being more female. Getting botulinum toxin injections seems to be more accepted.”

Dr Bhojani-Lynch notes that one of the main problems is that men don’t realise other men are having treatments, because it isn’t often spoken about. She says, “I had one man leave my treatment room the other day and come running straight back, because he couldn’t believe he’d seen another man in the waiting room. He thought he was the only one! You can imagine his surprise when I told him I treat about one man a day. If men understood that other men do have these treatments, they wouldn’t feel as embarrassed, so I think showcasing male results is really important.”

However, while Dr Bhojani-Lynch acknowledges that there is a stigma against men, she believes this can be linked to misconceptions about the industry as a whole. “It’s important to remember that 10 years ago even women getting aesthetic treatments done was a hush-hush thing.”

She says, “Nobody wanted people to know. Now, pretty much every woman has had, or thought about having, some form of treatment. There’s been progress in making aesthetics more normalised, but so far this is more for women than men. I think that in another ten years, this too could change.”

Dr Bhojani-Lynch suggests that one key way of encouraging men to go to aesthetic clinics is to post more before and after images of your male treatments. She comments, “I think including more male images in your marketing and social media strategies will be hugely beneficial, and it’s something I need to start incorporating myself. I market mainly to women because they mainly show interest, but if we don’t make it inclusive to men then they’ll never be interested. I think that if you did a photo ratio on Instagram of 50% men and 50% women, men would be more encouraged to investigate and less inclined to consider your clinic as a female-orientated environment.”

While Dr Armand agrees that there needs to be more male-oriented content for potential patients, he also encourages fellow practitioners to write more educational articles on the topic. He comments, “Whether it’s consumer media or business media, if all the content is about women it’s hard for men to think about where they can fit in. Case studies, journal articles, research, studies – the more information that is out there for practitioners will help us feel more comfortable treating the male face. We all have a responsibility to show the full range of what aesthetics can do, and make it clear it isn’t a woman-only thing.”

Dr Armand believes that it is down to the industry to make aesthetics a more male-oriented specialty. He says, “If you look at training courses, there are little to no programmes specifically designed for the male face. We practitioners have become so comfortable and confident with treating female faces, and many don’t know how to adapt their treatment approach for men. This can result in the men who do get aesthetic procedures coming out looking feminine or unnatural. Training providers need to consider the importance of running courses that teach practitioners about the male face, so that we can treat men effectively and subtly.”

Dr Bhojani-Lynch agrees, stating, “I know men that get put off by bad examples in the media – a lot of the male celebrities who are known to have had plastic surgery or fillers end up looking very feminine. I think this is because a lot of injectors aren’t aware of how to adapt their techniques for different faces. You can’t treat a male jawline or lips the way you would a woman, and vice versa! So it’s important for practitioners to really hone their skills and learn how to judge each individual patient’s face. Of course, there are men in the public eye who have had work done that is subtle and attractive, but people don’t talk about that because nobody notices. Again, this is why showcasing your own work and promoting your successful results on men is so important.”