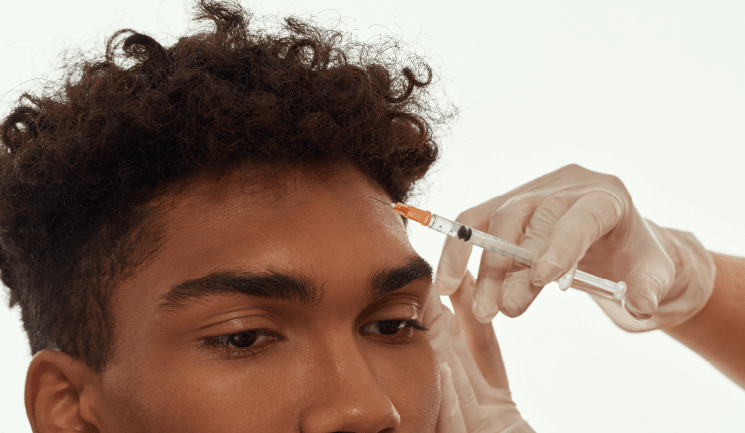 A 24-year-old woman presented to my clinic seeking an overall aesthetic facial enhancement, with the motivation being a desire to feel more confident about her appearance. She also had a specific request to enhance her chin projection and improve the shape and volume of her lips. Apart from mild acne, the patient was fit and well, was not on regular medication, and had no known allergies.

When assessing her skin, I found she had combination-type skin with T-zone oiliness, acne, dull complexion lacking radiance, and an uneven skin tone with ephelides and lentigines.

The degree of mandibular retrognathia/ retrogenia presented in this case would typically be treated by alloplastic implantation or orthognathic surgery. However, the range of aesthetic concerns that the patient presented with would have potentially necessitated additional surgical procedures to optimise her aesthetic outcome (for instance, malar implants, fat transfer, temporal brow lift and rhinoplasty).

We discussed the principal advantages of the surgical options, as well as the limitations and risks. However, the patient was reluctant to undergo surgical intervention, particularly when multiple procedures might be required to achieve the aesthetic outcome she sought. Consideration was therefore given to the non-surgical, minimally-invasive option of non-autologous soft tissue augmentation with hyaluronic acid (HA) fillers in combination with neurotoxin. The concept of facial harmonisation was explained to the patient as a staged process of creating aesthetic enhancement and balance within and between facial regions and improving the overall facial shape and structural framework.

I have devised the following fundamental principles that underlie facial harmonisation, which were highlighted and discussed with the patient:

This patient presented with an interesting array of aesthetic challenges due to various soft tissue issues complicated by the inadequacy of the underlying structural skeletal support. These challenges were particularly evident in the perioral region and surrounding structures.

A significant retrognathia/retrogenia resulted in inadequate skeletal support for the overlying soft tissue, manifesting as reduced lower face definition and a slightly obtuse cervicomental angle. Furthermore, the retrognathia and associated dental malocclusion (overjet and overbite) resulted in an intrinsic discrepancy in the position of the patient’s lips in repose. Consequently, she displayed a degree of lip incompetence with an inability to comfortably approximate her lips to form an adequate seal without straining her perioral muscles.

The commonly associated pattern of retrognathia, malocclusion and lip incompetence is typically accompanied by hypertonicity of the mentalis muscle, as seen in this case (Figure 5). The mentalis muscle normally provides vertical support and stability for lower lip elevation and everts the lower lip on maximal contraction.

A possible explanation for the mentalis strain in this context is that it occurs to increase the lower lip elevation to improve the approximation of lower and upper lips, hence reducing the intrinsic lip incompetence. However, the mentalis strain also results in excessive eversion of the lower lip and visible dermal puckering, which in this case were both more evident on the patient’s right side.

Significant mentalis strain is often observed with a similar but weaker ‘resting-state’ hypertonicity of the depressor anguli oris (DAO) muscles. This hypertonicity possibly occurs as a mechanism to provide an additional mechanical force that potentiates the mentalis contraction and central lower lip elevation. However, the DAO hypertonicity also resulted in a subtle downward pull (negative-axis tilt) of the oral commissures. Anatomically, muscle fibres of the extrinsic lower lip depressors and upper lip elevators intermingle with fibres of the orbicularis oris muscle (OOM). Consequently, a mechanical dominance at rest resulting from the hypertonicity of the lower lip depressors can slightly attenuate the sphincteric action of the OOM by conferring an opposing vector force. Consequently, the reduced OOM sphincteric action leads to a slight relaxation of both the lower and, paradoxically, upper lip.

This relaxation results in a minor but perceptible elongation of both lips in the coronal plane at rest in association with a loss in vertical height. The imbalance between opposing facial muscle groups, resulting in a shift of mechanical vectors favouring the dominant muscle action, haspreviously been termed dynamic muscle discord or DMD.1 DMD occurs in the highly mobile areas of the face, specifically the perioral, periorbital and forehead regions, which are affected by intrinsic and extrinsic muscles acting within those areas.

Where evident, it is an important consideration when planning a treatment strategy as it necessitates a holistic approach that may involve the correction of a deficiency in a different, often neighbouring, facial region that is not the direct target for treatment. The patient’s lips also had an intrinsic deficiency in volume and shape in proportion to her other facial features, and her upper lip displayed excessive gingival show in animation.

A mid-face augmentation of the soft tissue overlying the maxilla, zygoma and zygomatic arch was performed bilaterally. Juvéderm Voluma and Juvéderm Volux were injected at the deep pre-periosteal layer and deep fat compartments to improve the malar shape and projection. Pre-periosteal HA filler implantation on the zygomatic process of the maxilla and lateral surface of the zygoma (facies lateralis) resulted in a projective displacement force and increased soft tissue projection.

The improved structural framework compensated for the negative orbit-rim axis and indirectly attenuated the inferolateral portion of the tear trough sulci. Additional direct treatment of the tear trough sulci was then performed to optimise the results further. The submalar/pre-auricular concavity was also augmented in the pre-parotid fat layer using a cannula with a standard fanning technique.

The structural foundation in the lower face was improved through chin augmentation, addressing the patient’s significant chin recession. Two sessions were necessary to optimise the results, using a combination of high and mid-cohesivity HA fillers (Juvéderm Volux, Voluma and Volift) injected at different tissue depths and regions of the chin. The soft tissue pogonion, gnathion and mentum were augmented to provide anterior and inferior projection and chin definition. The labiomental sulcus was treated to reduce the concavity. The displacement force produced by filling the sulcus resulted in an infero-anterior rotation of the mentum in the coronal plane, increasing the mental height and anterior projection.

The improved chin projection and mechanical block secondary to the chin augmentation attenuated the patient’s mentalis strain and dermal puckering, while enhancing the lower lip support. Her lip incompetence and excessive lower lip eversion were corrected through this myodmodulatory action. In the third session, a residual excessive downward pull on the right side of the lower lip resulting from persistent DAO hypertonicity was treated with neurotoxin.

A lip augmentation was performed to optimise the upper and lower lips’ volume, shape, and definition. In addition, care was taken to preserve the topographical features of the lips (such as the mucosal tubercles) and natural wrinkle patterns (sulci labiorum) as seen in Figure 3. M-shaped lips are challenging because of a lack of dry mucosal surface area that restricts volumisation. M-shaped lips also typically present with perioral muscle hypertonicity. The increased muscle activity at rest and on animation pulls on and compresses the vermillion lips, resulting in a loss of shape and apparent thinning.

Therefore, a relatively viscoelastic and cohesive gel product (Restylane Defyne) was used to counter the deformation forces and reduce the likelihood of filler migration resulting from the perioral muscle hypertonicity. The downside of using a more cohesive product is the resistance of the treated lips to fully compress when in animation resulting in a residual slightly excessive projection of the white roll of the upper lip.

The patient’s upper lip excess gingival show was treated by soft tissue augmentation of the piriform fossae and nasolabial folds, which increased the mechanical resistance to the levator muscles during animation (see Figure 4).

Fillers do not fundamentally ‘lift’ the soft tissues. However, depending on the patient’s anatomy, the localised projection created by the soft tissue augmentation can lead to a pull on the neighbouring regions. This ‘pull vector’ can, in turn, lead to an apparent ‘pseudo-tightening’ of the adjacent area along the axis of the projective force. However, the observable magnitude of this effect depends on the degree of pre-existing soft tissue laxity versus underlying structural support.

Indeed, the apparent soft tissue pull is predominantly observable in patients who do not have significant laxity. In this patient, the increased chin projection following treatment indirectly resulted in an improved definition of the lateral jawline and a slightly more acute cervicomental angle. Soft tissue augmentation of the ramus angle was also done to improve the definition and projection of the postero-lateral jawline.

A non-surgical brow lift was performed using Botox, which was also used to reduce the appearance of the rhytids in the upper face. The injection points and doses were based on a dynamic mapping assessment of the patient’s facial expression patterns, muscle movement, specific muscle mass and shape.

An evidence-based skincare plan was formulated for home use consisting of the Gentle Cleanser (alternating with Blemish and Age Cleanser at night twice a week), Equalising Toner, Phloretin CF, Blemish and Age Serum, H.A. Intensifier and Brightening UV Defence – all from SkinCeuticals. The patient also had a six-session course of hydradermabrasion, light glycolic acid peels and LED phototherapy using the DermaLux FlexMD, with the sessions one month apart.

During the facial harmonisation process, 14.45ml of HA filler was injected over a main session, an intermediary review session and a refinement session. These filler sessions were combined with two sessions of neurotoxin. Figure 1 shows the treatment results taken eight months post-procedure, demonstrating a significant aesthetic enhancement.

The patient’s overall facial shape and profile conveyed more optimised proportions, with improved contour definition in the middle and lower thirds. There was a notable reduction in her perioral dynamic muscle discord with the restoration of her lip competency and attenuation of the chin dimpling.

The aesthetic profile was also improved, resulting from the increased chin projection, malar and nasal tip definition, enhanced lip projection and shape (Figure 5), and elevated brow positioning. The periorbital region was also rejuvenated through amelioration of the tear trough sulci and pericanthal rhytids, and the brow lift.

Notably, the patient’s aesthetic enhancement was apparent both at rest and in animation (see Figure 3&4). Her smile pattern was improved (Figure 7) due to the correction of the upper lip excess gingival show, reduced lower lip depressor muscle dominance and a secondary increase in the zygomaticus and risorius muscle pull.

Furthermore, her brow was maintained at a relatively elevated position during smiling, and the pericanthal rhytids were less evident, further enhancing her appearance during expression. Finally, her skin tone and radiance were markedly improved with a reduction in her acne blemishes and a smoother skin texture. The patient reported high satisfaction levels and psychosocial wellbeing with an elevated sense of confidence and outlook.

Conceptually, facial harmonisation represents a paradigm shift in the role of fillers in facial aesthetics. This case presentation demonstrates the versatility of soft tissue augmentation and myomodulation in a patient that would otherwise have traditionally been regarded as needing surgical intervention. This case also highlights the importance of careful assessment, including identifying facial intricacies that are often overlooked such as dynamic muscle discord, as well as proper procedural planning and staging.