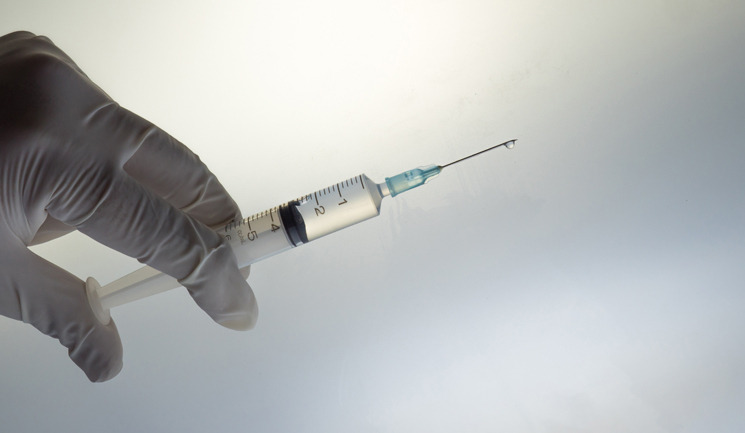 Complications caused by hyaluronic acid (HA) fillers are rare, particularly those that have a delayed reaction. As aesthetic practitioners we must acknowledge that there is always a chance of them occurring and we need be proficient in recognising, diagnosing and treating them. HA filler complications can be difficult to diagnose, especially if the practitioner is not experienced in managing them.

Filler complications are typically divided into four categories: allergic, infection, late onset nodules/inflammation or vascular compromise.1 It can be difficult to diagnose delayed complications of HA fillers as signs and symptoms can often overlap. It can be particularly challenging to differentiate between a bacterial biofilm and a delayed hypersensitivity reaction as the physical signs such as swelling and erythema occur in both. Initially, they require different management as a biofilm will require antibiotic treatment, whereas a delayed hypersensitivity reaction requires immunosuppression.2 However, in both reactions the eventuality is that they will both require the HA filler to be dissolved.3 The clinical features of delayed hypersensitivity are characteristically erythema, tenderness, swelling, induration and occasionally nodules.2,4,5 It typically occurs within a day of the treatment but can present as late as several weeks or months.3,4

Using the Gell and Coombs classification system for hypersensitivity found in Table 1, delayed type IV hypersensitivity is mediated by T-lymphocytes rather than antibodies.6 It involves the interaction of T-cells, monocytes, and macrophages.4 However the aetiology related to HA filler hypersensitivity is not completely understood.5 There is suggestion that patients with pre-existing medical conditions such as particular autoimmune diseases or allergies are more susceptible to adverse HA filler reactions, and so it is at the discretion of the injector if these candidates are suitable for HA filler treatment.1 Other triggers can also be viral illnesses, bacterial infections, excessive UV exposure or vaccinations. These can activate an immune response to foreign body implants and create a delayed onset reaction even to those that have had dermal fillers years ago.7,8,9 The possible side effect of the SARS-CoV-2 vaccination is currently relevant due to the large cohort of patients receiving it. Fortunately, there are not many reported cases of vaccination related delayed hypersensitivity reactions, but if there is a suspected case the Aesthetic Complications Expert (ACE) Group World have published guidelines on the recommended treatment.9

Hypersensitivity can persist indefinitely if left untreated and therefore it is best to remove the underlying cause by dissolving the HA filler.3 Antihistamines are known to have no impact on these reactions.2,3,4 Steroids are the initial mainstay of treatment, but long-term steroid use is not recommended due to the associated risks.11 If steroids have little impact then hyaluronidase is needed to dissolve the underlying cause.2-4,11 If non-HA fillers are used then laser treatment, extrusion or, as a last resort, surgical excision is indicated.2

Current literature offers a plethora of suggested doses for hyaluronidase, but it is advised to use as much as deemed necessary as suggested by the ACE Group World guidelines.11 The type HA dermal filler used is an important consideration for how effective hyaluronidase will be, so it is worth considering this when selecting HA fillers for use in your practice. Some dermal fillers dissolve easier than others and some need a higher dose of hyaluronidase to be completely removed; which is partly down to the composition and degree of cross-linking.10,12

This case report demonstrates a 54-year-old woman that attended for HA dermal fillers in her lower face. Six weeks after her procedure she developed a symmetrical diffuse swelling and induration over the injected areas which was treated as a type IV delayed hypersensitivity reaction. Hypersensitivity can be classified as acute or delayed dependant on time of onset, this is how a diagnosis of delayed type IV hypersensitivity was made.4

The patient attended the clinic for the first time with no previous history of non-surgical treatments. Medically, she was fit and well with no allergies and was not taking any regular medications. Her primary concern was ageing around her lower face. Although she was advised to have her mid-face volume addressed first, she wanted to focus the treatment on her lower face first as that was her main concern.

The area was cleaned with a topical antiseptic prior to injecting. A topical anaesthetic cream with lidocaine was applied over the area and a sterile dressing pack with sterile gloves were used. She had 5ml of a high-concentration, high G-prime and cohesive HA filler injected into the pre-jowl area, chin, labiomental crease, marionette and nasolabial folds. The treatment was solely carried out using a 25 gauge 38mm cannula and completed with no complications.

Post-procedure cream containing chlorhexidine designed to soothe and protect the skin was applied at the end of the procedure. The patient was seen after two weeks for a review and she reported no complications or concerns. She was very happy with the results and subsequently enquired about having her tear troughs treated, which was carried out another two weeks later, once again with no complications. The HA dermal filler used for the tear trough was of a lower HA concentration, G prime and cohesivity, due to the delicate nature of the area being treated.

Four weeks after the tear trough treatment and six weeks after her initial treatment the patient suddenly developed generalised swelling and oedema to her lower face when she woke up in the morning. The tear trough region was unaffected at this point. On examination there was generalised indurated swelling in the treated areas of her lower face. The swelling was tender to palpate but not warm to touch. The overlying skin was unaffected and there were no clinical signs of infection. The patient did not have any recent illnesses that could have affected her immune system, nor had any trauma to the area. She did not have any recent dental procedures or infections. Nothing unusual was detected in the patient’s recent history to predispose her to such a response. As such it is not clear why this patient was affected in this manner.5

A delayed type IV hypersensitivity reaction was the diagnosis made due to the indurated swelling which is a key sign of this condition.2,5,11 The patient was understandably eager to have the issue addressed as soon as possible. Based on the ACE guidelines, steroids were prescribed (Prednisolone 40mg once a day for seven days).11 The plan going forward was to either taper off the steroid dose if there were signs of improvement or consider removing the HA filler with hyaluronidase. Unfortunately, after one week the steroids had little impact and we proceeded to dissolve the HA filler, removing the underlying factor causing the hypersensitivity.

A dose of 1,500 units of hyaluronidase was injected directly into the affected areas. Another course of Prednisolone was given to taper off the original dose, reducing the dose by 5mg each day until reaching 5mg as a final dose. The patient required a further two courses of hyaluronidase for the swelling to fully subside. This was administered two weeks apart each time to ensure any swelling that was related to the procedure of dissolving itself had settled. Due to the larger size of the affected area, 1,500 units were used in each of the three courses to completely dissolve the HA filler. After the second course of hyaluronidase, which was four weeks after the initial reaction, the indurated diffuse swelling had reduced significantly to localised firm and palpable nodules. Concurrently, a similar swelling appeared in the tear trough region two weeks after the first swelling appeared which was treated in the same fashion. This was expected and it was relayed to the patient that it would likely happen as hypersensitivity is a systemic response.10 All areas treated with HA dermal filler were dissolved successfully without further complication. After each treatment the patient was given aftercare advice alike to the advice given after any injectable treatment.

The patient was reviewed regularly throughout the treatment. At the final review, two weeks after the third and final round of hyaluronidase, all swelling had settled, and no nodules were present. The patient was happy with the outcome. As it was not clear why the patient had such a reaction there is a possibility the patient would have a similar reaction to future HA filler treatments even with other types of HA brands. Therefore, I would not recommend repeat HA dermal filler treatment for this patient, but other fillers may be considered.

Complications can happen to any practitioner regardless of their experience. It is probable that the more procedures you carry out the more likely you are to come across them. We need to be aware of delayed risks and ensure the patient is appropriately informed during the consent process. It is advisable to communicate with fellow aesthetic practitioners for advice and second opinions. If you do not feel confident in treating a particular complication, or do not have the experience in doing so it would be wise to refer the patient to a more experienced practitioner. We completed an adverse reaction form with the HA filler company to rule out any possible manufacturing issues and it was also discussed with one of the key opinion leaders of the HA brand, who agreed with our management plan. It is certainly worthwhile for clinicians to keep guidelines at their place of practice for quick reference if a complication should arise.