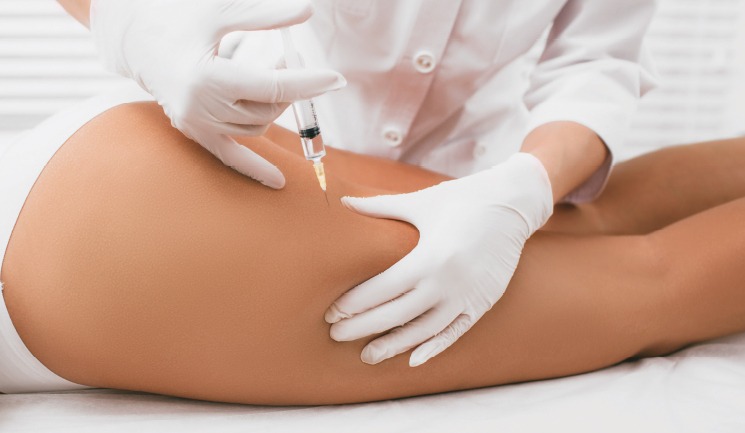 Having unique services and being an expert in what you provide is important both for a successful business and for patient safety and satisfaction. This includes being well-prepared for managing the complications. This article discusses the possible adverse effects following deoxycholic acid for the purpose of fat reduction. It also presents a case study with long-lasting cutaneous adverse events associated with deoxycholic acid administration for local excessive adipose tissue and our approach to management.

Intralipotherapy and its safety profile

The history of using chemical compounds such as phosphatidyl choline (PDC) and/or deoxycholic acid (DCA) to treat local adipose tissue deposit can be traced back to the early 2000.1 Widely known as injection lipolysis, DCA is extensively used for non-surgical body or face contouring, targeting localised excess fat pocket. The mechanism of DCA is leading to the lysis of local adipocytes, resulting in permanent improvement in contouring.2,3 According to the literature, DCA has a high safety profile, with a low percentage of patients experiencing adverse effects such as nodules lasting more than one month (0.9%) and skin necrosis (0.01%).4 There are two categories of side effects, which are all localised within the treatment areas.5 These include the common and normally relatively short-term complications, and those that are extremely rare and long-term.6,7

There is a study by Amore et al. which showcases the common and short-term adverse effects associated with fat dissolving treatment well. In the study of 221 participants:4 75% experienced swelling (oedema) within three days post treatment, 60% had tenderness lasting more than 12 hours, 41% presented with ecchymosis, 39% experienced warmth to the treatment area, 30% reported temporary altered sensation (numbness), 28% presented with redness/ erythema and 14% of lumps/nodules which resolved with one month.

Reasons for extremely rare and possibly long-term major adverse events to occur are normally associated with the intralipotherapy technique, including uneven administration, bolus deposition, and superficial placement of the agent. Patient age (over 60) is also a factor whereby reduced metabolism could lead to inadequate treatment intervals, and overdosing will also cause issues, as will treating a patient too soon (before four weeks) after their initial session.8

A 26-year-old lady presented to Dr Xu’s clinic for a fat dissolving treatment. Her main area of concern was the upper part of the lateral thighs, superficial to the skeletal prominence of greater trochanter. It was agreed that DCA would be a good treatment for this patient because she had a healthy lifestyle with regular gym trips three times per week.

All other body parts were within normal proportion, except a localised secondary fat pocket, which had been present at both lateral thighs since puberty. Dr Xu has been using the DCA brand DesoBody for body contouring since it was first available in the UK in 2018 and has achieved a good portfolio of satisfactory treatments, so this was the product of choice. For her treatment, after the skin was thoroughly disinfected three times with chlorhexidine to minimise complications, each 10ml vial of DCA was mixed with 1ml Lignospan Special (20mg/ ml lidocaine and 12.5ug/ml adrenaline) before being administered to the area of interest.

The fanning angles between each thread was 2-3 degrees and the angles were only changed when the needle had been retracted back to the dermis layer to avoid the needle bending. There was only one needle entry point on each of the lateral thighs. In total, 40 passes of 0.5ml each thread (20ml in total) was administered to the left lateral thigh, and 20 passes of 0.5ml (10ml in total) linear threads to the right lateral thigh. The whole treatment procedure was smoothly done without major discomfort from the patient. Immediately post procedure there was some redness at the treated area, especially on the left side, where a higher dosage was administered. The red area was padded with sterile gauze before helping her to put her tightening garment on, and she was advised to keep wearing it for 72 hours from the treatment, then keep it on at night when sleeping for seven days. The tightening garment is an essential part of the protocol in fat-dissolving injections for minimising swelling and assisting with lymphatic drainage post treatment. The patient was booked for a review in five weeks.

This patient emailed the clinic the next morning as she was experiencing extreme swelling and pain, induration, and difficulty getting dressed due to swelling, particularly the left thigh. Judging from the pictures she sent of her left thigh, the treated area had more than average swelling and looked inflamed. The patient was booked for a review appointment at the next available time, and in the meantime advised to take arnica tablets, massage with arnica gel, avoid contaminating the injection site, and keep a detailed track of image record of the changes.

On day three post-treatment, the patient reported that the swelling had settled down, so she decided not to present to the clinic for review. She was advised to return for a clinic review at five weeks, where she would be assessed for a second treatment. At the five-week assessment, there was no redness, and soft tissue thickness reduced to 3cm, which was a good response in terms of result. However, there were three lumps on the left, and one lump on the right thigh and the sensation on the left lateral thigh was slightly reduced. There was an area of discolouration with a diameter of approximately 10cm on the left lateral thigh, and a periodical shooting pain at the right lateral thigh, scoring 1/10, which is not exacerbated by physical pressure.

From clinical examination, Dr Xu felt that the soft lumps were most likely caused by uneven distribution of the agent so another treatment was carried out using a 20 gauge 100mm cannula to help break down the lumps. A total of 17.5ml of DCA was administered. The next day, the patient reported low degree of pain scoring 0.5/10, and said the swelling was very subtle compared to the first treatment. The picture sent by the patient seven days after showed improvement of the induration and bruise. At the four-week review, the lump sizes were reduced by 50%, but the discoloration had very little improvement. The initial shooting pain the patient was describing was not reported since this point, and all clinical examination showed normal sensation.

A few treatment options were proposed to restore normal circulation and break down the lumps of fatty tissues (cellulite). The first was deep tissue massage that the patient can perform with a manual massager at home. The second was carboxytherapy treatment in clinic. Although this treatment approach is not discussed in the literature for treating DCA complications, its therapeutical properties,9,10 and historical use to treat diabetic ulcers11 provided confidence that this would be a good treatment of choice for this patient.

Carboxytherapy has also been recommended by UK DesoBody trainer and Botulinum Toxin Club founder Dr Harry Singh, as well as the inventor of DesoBody, Professor Roberto Amore, for the improvement of cutaneous and subcutaneous adverse effects from lipolysis injection.12 The first effect following CO2 injection is a strong vasodilation of the vessels; therefore increasing oxygenation in the treated area. It also improves regenerative activities and stimulates the formation of new capillaries – also known as angiogenesis. As a result, it increases circulation and stimulates localised metabolic activity of the tissues, which is known as the Bohr effect.13,14

About 1% of absorbed CO2 converts into carbonic acid CO2+H20=H2CO3; further reacting to leave bicarbonate dissolved in the blood plasma H+HCO3. These reactions cause the pH of the blood to decrease, and release oxygen to the tissues.13 The patient was prescribed 10 sessions of weekly carboxytherapy treatments with Dr Olha Vorodyukhina. Injection depth were subdermal and intradermal for both circulation stimulation and cellulite reduction. The total volume of gas administered at each treatment was 80cc (left) and 40cc (right). After five sessions of CO2, the right side had full positive resolution. After 10 sessions on the left side, there was significant improvement in colour and further lump reduction. The patient was advised to have another five to 10 sessions of CO2 for the right thigh, and after five more sessions her skin had almost returned to normal.

The safe dosage regime and techniques, pharmacokinetics, pharmacodynamics and adverse events of DCA injection have been well researched and documented in the past 30 years.15 DCA is highly selective for adipose tissue, and very small interaction with protein-rich tissues such as muscle tissue, blood vessels, and skin.2,8,13,15 On the other hand, as DCA causes lysing effect to the targeted adipose tissue with disruption to the cell membrane, leading to cell death and tissue inflammation, its vasoconstrictive nature could result in undesired cutaneous effects, if dosage or treatment technique have not been optimal.16 Duncan et al. also described in a clinical safety survey about the consensual poor outcome at inner or outer thigh, compared with other areas such as abdomen, flanks and submental chin.17 The main reasons for the thighs to be a poor area to treat include:

On reflection of this case, it is likely that the dosage for the areas intended to treat was higher than this patient’s soft tissue tolerance level. This indicates that, when assessing for fat dissolving at the area of skeletal prominence, the standard protocol of dosages should be lowered, halved, or even avoided completely, to minimise significant short-term and long-term complications such as redness, swelling, pain, and lumps. From the above we have learnt that when treating the lateral thigh, especially over the greater trochanteric area, the treatment should be performed with great caution at a minimal dosage, or avoid treating at all if less desired. To minimise the risk of possible cutaneous effects, when treating areas superficial to major skeletal prominence such as great trochanter, we propose:

It’s important to be aware of the possible complications when administering DCA treatments and know how to handle both short and long-term adverse events. Carboxytherapy can be considered to correct the lumps, induration and discolouration from fat dissolving treatment and should be a widely equipped service for clinics providing fat reduction services.