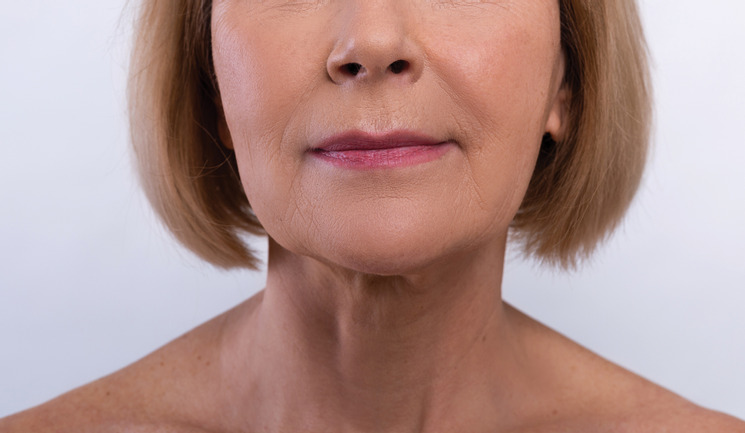 A 60-year-old Caucasian female presented to my clinic with concerns about jowl development and laxity under her chin and in the neck. She was seeking a treatment which would confer skin tightening across the jawline, chin and the neck, without the need for surgery. The patient had never had any cosmetic treatments to these particular areas in the past. On examination, there was marked laxity in the submental area, anterior neck with static wrinkles and formation of jowls disrupting the contour of the jawline. The main issue here was loss of tensile strength and elasticity due to chronological ageing.

During the consultation, it was apparent that a key factor for this patient was to obtain an age-appropriate yet natural result. She had no relevant past medical history of note. We discussed the different treatment options available to her, which included high-intensity focused ultrasound (HIFU) and surgical facelift. After outlining details for both, we agreed that HIFU would not have provided a significant enough result for a long enough period as desired by the patient, while a surgical facelift would carry too high a risk of complications with much more noticeable downtime, which the patient did not want to experience.

I had also outlined the use of a minimally-invasive laser-based skin tightening procedure called Endolift. Given the patient’s request for minimal downtime, natural results, and a sufficient outcome longevity, this was deemed as the preferred choice. The patient opted for a three-area treatment to include the lower face (including mandibular border), submental area and anterior neck.

This treatment is performed using the LASEmaR 1500 device, which is FDA-approved for laser-assisted liposuction. It is a 1470 nm diode laser which acts by remodelling the hypodermis of the skin, causing skin tightening and where necessary, reduction of excessive fat through lipolysis.1 Endolift uses a specially designed micro-optical fibre, as thin as a human hair, to deliver the laser energy. The laser creates microchannels of trauma in the hypodermis, which stimulates retraction of the connective septum, and within the extracellular matrix causes upregulation of fibroblasts, thereby stimulating neocollagenesis.2

The patient had the correct clinical indications for treatment: significant skin laxity and a degree of localised adiposity. She asked about the number of sessions that would be required and how long we could expect results to last. Lipolytic effects can be long-lasting, provided the patient does not have a significant weight gain, whilst treatment sessions depend on the degree of skin laxity and adiposity to address. In this patient’s case, she was told of the possibility of requiring a second top-up treatment between six to nine months to confer a greater skin tightening advantage, and that results are expected to last between one to two years. The patient had no contraindications to treatment, so we were ready to proceed.

Prior to treatment, the skin was sterilised using NatraSan antiseptic spray. The skin was then marked up to demarcate safe zones for treatment and high-risk areas to avoid, such as the thyroid tissue and the territory of the marginal mandibular branch of the facial nerve.

To ensure the patient’s comfort during the procedure, a percutaneous local anaesthetic was used. The preferred choice was 2% lidocaine, reconstituted into 0.9% sodium chloride, injected in a fan-like manner into the three treatment areas using a 22 gauge blunt cannula. The local anaesthetic is used to provide numbing, not complete loss of sensation, so the patient can provide some tactile feedback if highly innervated areas are being adversely affected. The quantity of anaesthetic used is also restricted to avoid excess liquid, which can cause dispersion of the photothermal effect of the laser.3

A laser-protective eye shield was applied to the patient prior to the treatment, in compliance with non-surgical laser standards.4 After allowing five to 10 minutes for the local anaesthetic to be effective, I began the procedure.

There are two types of fibre that can be used for Endolift: linear (also known as bare-tip) or radial. The laser beam in a linear fibre is emitted in a forward direction, whereas the radial fibre provides a more circumferential laser beam. The fibres come in different sizes, ranging from 200 to 600 microns, which are indicated for different areas of the face and body. For this patient I used a 300-micron linear fibre as there was a degree of lipolysis to achieve and this linearity theoretically provides a relatively stronger irradiance compared with the radial variant, given what we know from endovenous laser ablation studies comparing fibre tips.5

I began at the left lower face, inserting the fibre under the skin approximately 2cm anterior to the tragus by temporarily pulsing the laser, creating a micro-burn in the skin marking the entry point. I advanced the fibre stopping short of the corners of the mouth, then pulsed the laser continuously during retrograde movement towards my entry point. I continued to treat the lower face area using this technique in a fan-like manner. We know that the marginal mandibular nerve is most susceptible to injury where it courses over the facial artery in the region of the mandible,6 so this area was treated with caution.

Once the clinical endpoint was reached, i.e. a noticeable retraction in the skin and discernible firmness, I moved on to the next area. In the neck the entry point used was 1cm below the angle of the mandible, staying anterior to the border of sternocleidomastoid, and under the chin at the submental crease extending to the region of the hyoid bone. Since we know that the thyroid gland contains photosensitive tissue, and as one study has demonstrated, even the use of low-level infrared laser irradiation results in thyroid hormone profiling changes,7 the fibre did not traverse the thyroid tissue at any point during the procedure. Throughout the treatment a Zimmer cooling device was used to provide more comfort for the patient, but also to cool the tissue from the heat generated by the laser.

In some areas there was more marked adiposity, such as the submental region, so here I found that reducing the speed of fibre retraction when pulsing the laser was more effective at lysing fat cells. The extent of fat melting that occurs is clinically apparent by a specific ‘crackling’ noise heard during treatment. The more lipolysis occurring, the more apparent that noise becomes. In areas where skin laxity was the main concern (i.e. lower face and neck) I found that speeding up fibre retraction and pulsing the laser during anterograde movement enhanced the retraction of the tissue, achieving the endpoint faster.

I encountered no issues with the procedure, the tissue responded very well with no bruising or haematomas from the fibre penetration and the patient was very comfortable throughout. Where there were areas of higher resistance, I manually manipulated the skin to guide my fibre through the tissue.

Immediately following the procedure there was a visible improvement in skin laxity, particularly to the neck area. Post procedure the patient had mild erythema, very mild swelling and slight paraesthesia in the lower face (as expected), however no motor deficit to any of the branches of the facial nerve were noted. She denied any pain following the treatment.

The laser creates microchannels of trauma in the hypodermis, which stimulates retraction of the connective septum

The patient was advised to stay out of direct sunlight for 48 hours following treatment, to avoid touching, rubbing or applying anything to the skin for 24 hours to reduce the risk of infection, and to wear a compressive lower face/neck garment where possible in the 48-72 hours following treatment to help reduce swelling, bruising and continue to help shape the final result.

Although the patient chose not to on this occasion, I usually recommend a skin bioremodelling product such as Profhilo after this procedure as it helps to stimulate four different collagen proteins and elastin in the extracellular matrix,8 allowing the two treatments to work in harmony.

I scheduled a follow-up appointment with the patient four weeks post treatment, as this is usually sufficient time to allow any swelling and/or bruising to settle. As well as this, the lysed adipose cells have been cleared through the lymphatic drainage and procollagen formation is in progress. At the patient’s four-week review, she reported that the erythema subsided within 24 hours, the swelling had resolved within five days, and the paraesthesia lasted two to three weeks. She had marked improvement in the laxity to her neck and jawline, while the submental adiposity had significantly reduced.

The patient was extremely pleased with the results. She could see a visible difference to all three areas and I was pleased to inform her that this result would continue to improve over the coming six to nine months as collagen matures.

Patients undergoing Endolift treatment should be fully informed and consented on the possible risks and side effects relating to the procedure. These include pain, bruising, haematoma formation, erythema, swelling or oedema, micro-burns to the skin, hyper/hypopigmentation, paraesthesia/dysaesthesia/ hyperaesthesia/anaesthesia, nerve injury/neurapraxia, giving rise to altered facial expressions (usually temporary lasting up to a few months), and optical fibre breakage under the skin.9

Endolift is a safe and effective procedure for skin tightening, offering the added benefit of laser-assisted lipolysis. Patients nowadays are seeking minimally-invasive procedures to achieve their desired aesthetic,10 making this treatment perfectly positioned in the aesthetics arena to deliver results without the need for surgery and with very little downtime.

Although many patients undergoing treatment will see an immediate improvement, the final result can be appreciated six to nine months post procedure. The key to a successful result using the device is adequate patient assessment, consideration of the degree of skin laxity, skin thickness and extent of adiposity to determine not only the parameters for use, but also the approach to treatment. For severe laxity the patient should expect to need two sessions, ideally six months apart, and for severe adiposity they should be pre-warned they may not be suitable.