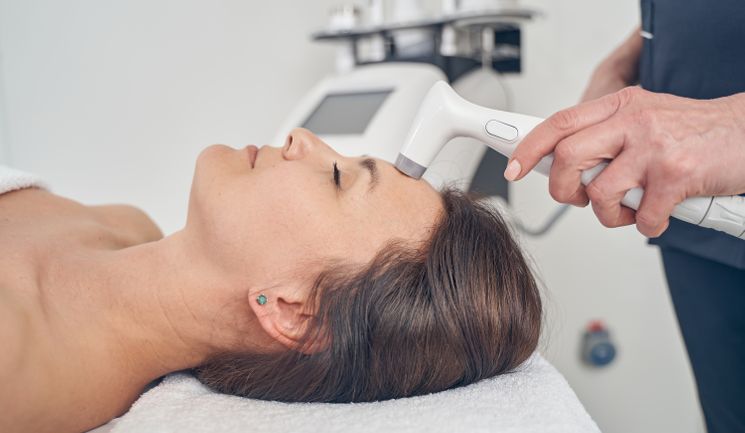 Photobiomodulation (PBM) was discovered by accident in the 1960s.1 A Hungarian scientist, studying the effect of ruby lasers on tumours in mice, found that his lasers were producing very unusual results: the mice’s wounds were healing more quickly and new hair was growing on their shaved skin. From there, a novel field of investigation was born – and it has recently been gaining increasing momentum in multiple medical modalities.

The underlying principle of photobiomodulation is that light has the ability to activate photoreceptors and chromophores naturally contained within the skin, with potential therapeutic effects. The vocabulary surrounding this process has been confused in the past, with various terminologies used interchangeably or inaccurately.2 It is therefore important to clarify the definition of PBM as a form of low-level light therapy utilising non-ionising, non-thermal light in the visible to infrared spectrum. These light sources include lasers and light-emitting diodes (LEDs), and they act on endogenous receptors to activate either stimulatory or inhibitory biological pathways.3 This phenomenon is distinct from the common use of light (often in the near infrared range) to heat tissues, relying on thermal light energy as the mechanism of action.3

So how is light in non-photosensitive and extra-ocular tissue actually being received? At the most basic level, the process begins with the absorption of a photon of a specific wavelength by a receptor in the skin. Usually this causes excitation of an electron, and a signalling cascade is initiated. However, beyond these first steps, our explanations get murkier. Despite this ambiguity and initial skepticism, it is not in dispute that PBM is a very real phenomenon. It has been used in several areas of aesthetic medicine: in the treatment of acne, cellulite, body contouring, alopecia, and antiageing (Table 1).4-8

The majority of the research into PBM has examined light in the red (600-700 nm) and near-infrared (770-1200 nm) range.10 This is because the first proposed mechanism of action for PBM was mitochondrial cytochrome C oxidase, a copper-containing enzyme with a biphasic response to these two ranges of light. It is now one of the most well-known pathways described in the literature.13,14 After photon absorption by cytochrome C oxidase, there is an increase of mitochondrial activity leading to a proliferation of adenosine triphosphate (ATP), nicotinamide adenine dinucleotides (NADH), and ribonucleic acid (RNA).15 There is also the release of nitric oxide (NO), a vasodilator, and reactive oxygen species (ROS), which act as transcription factors.15 It is proposed that the vasodilatory effects of NO and upregulation of growth factors may explain PBM’s ability to cause hair growth, although it is not completely understood yet.12 In addition, fibroblast stimulation and collagen synthesis may lead to improvement in scar appearances.11 This proliferation of gene transcription factors may also be involved in cells’ defence mechanisms against stress and hypoxia, which aid in wound healing.10

The cytochrome C oxidase pathway has also been described as the mechanism behind body contouring, where ATP synthesis leads to the up-regulation of cyclic adenosine monophosphate (cAMP), activating a lipase that breaks down intracellular triglycerides.9 Part of this pathway has been shown, via electron scanning microscopy, to create pores in the adipose cell membranes, allowing the release of broken-down fatty acids and glycerol into the extracellular space, and collapse (but not death) of the adipose cell.9

Opsins are a group of G protein-coupled receptors that have been well-characterised and described in the skin of animals. They are responsible for all sorts of biological marvels from the camouflaging colour change of octopi to the thermoregulation seen in lizards.16 In humans, opsins primarily exist in retinal photoreceptors, but have also been described in the skin in melanocytes, keratinocytes, fibroblasts and hair follicle cells, responding primarily to blue light wavelengths.16 Initially it was unclear if these were just a vestigial evolutionary throwback, or still performed important physiological roles. However, early in vivo studies have suggested the possibility of opsins playing an important part in potential future therapies for hair loss and skin pigmentation disorders.17,18 The proposed mechanism is primarily via calcium channels.10 There is still much to discover, and opsins represent one of the most exciting and promising areas of exploration in photobiomodulation.

There is some speculation that longer wavelengths of light (>1000 nm) may be affecting nanostructured water in heat- and light-sensitive ion channels, opening them and leading to changes in intracellular calcium concentrations.19 Water is omnipresent in biological tissues, and has been shown in some studies to act as an active molecule with the ability to affect physiological change.10,20 Water is not just a passive solvent, but capable of forming a multitude of complex structures with their own properties. Molecular biologists are just beginning to understand and appreciate the dynamic role it plays in the cell, donating and accepting protons, changing the environment of proteins, and influencing biomolecules around it.20 In PBM, it is proposed that absorption of a photon increases the vibrational energy of water, leading to a disruption of the protein structure at the ion channel, allowing it to open.1

There is also some evidence that infrared wavelengths activate melanocyte cells directly, decreasing melanin synthesis via the tyrosinase pathway and the p53 signalling pathway.21 Cryptochromes, which have an important role to play in the circadian rhythm, have also been implicated in photobiomodulation. They have a significant function as gene transcription regulators, with vital roles in metabolism and the immune system.15

PBM has been used in acne treatments and there is evidence that blue light acts on endogenous porphyrins produced by P. acnes bacteria, creating free radicals and destroying their cell membranes.5 Red light has also been used due to its anti-inflammatory effects, and combination therapy with both red and blue light has been beneficial for acne. However, the optimal wavelengths for this are not yet defined.9

Gaps in the literature

The multitude of currently proposed mechanisms of action for PBM (some better supported than others) points to the fact that there are many different receptors and pathways activated in this phenomenon.15 This is already a very complex tangle of biological cascades, and it is further complicated by the fact that there is still no consensus on parameters or protocols for the therapeutic uses of PBM. Despite the fact that there are thousands of published research articles on the subject, most utilise different variables with an unfathomable array of possible permutations.22 To make things even more convoluted, in many historical studies experimental parameters were just not adequately described. This represents the first big hurdle in gaining a true understanding of this process from the current research. There is probably an ideal range of wavelengths, dose, and intensity for PBM where it will be the most effective for any given condition – below this range there may be little benefit, and above this range there may even be inhibition or harm.10 Additionally, as part of the biphasic dose response, PBM can either stimulate or inhibit processes at the same wavelength, depending on the energy used.23 In addition to this, tissue optics further complicate things – our skin will absorb and scatter light differently, depending on where PBM is used on the body, our individual skin type and colour, the quality of the skin, and the existence of any skin conditions.10

The task now is defining what parameters PBM will be the most therapeutically effective at. In order to do this, the general consensus moving forward is that the parameters in experiments must always be defined: laser or LED, wavelength, power, power density, fluence, energy, and the number of sessions.2,9,13,15

Are there risks to our patients?

As discussed, there is clearly a lack of understanding of how PBM works. And within the current body of literature, there are several other shortcomings in addition to the varied treatment modalities and unreported parameters. Many studies are in vitro, and the extent to which their results can be extrapolated to a patient population is not clear. The existing in vivo studies are also limited by small patient sample sizes.4,6-8,24,25 A few studies have been pointed out as having potential bias, when authors disclose existing financial conflicts of interest.10,13,26 In addition, not all studies have appropriate controls in place.10,21 A systematic review carefully analysed the discrepancy of some studies showing positive effects, and others have shown negative effects using the similar parameters.22 It is worth repeating that untangling this interplay is complicated.

So, does the current lack of understanding of PBM pose a potential risk for our patients, especially as many assumptions are being made about efficacy and mechanism of action, which have not yet been clearly proven? Data on long-term effects of photobiomodulation is still lacking. However, despite this, there does seem to be a high benefit to low risk ratio for this treatment modality. In the past 50 years of its use, there has been a very low incidence of adverse effects associated with photobiomodulation. Adverse events that have been reported include mild dryness, erythema, desquamation, and pain.27 However, these were mild and infrequent and, in the majority of studies no adverse events are reported at all, with no severe adverse events reported overall.9,27 Because of the rarity of these mild adverse effects, and as most studies either report none or mention very mild, self-limited events with little detail, it is difficult to comment on whether there are specific triggers or risk factors that would make a patient more likely to experience one. A recent review, compiling the results of 31 clinical studies and approximately 1,384 patients, recommended that clinical use of PBM in skin clinics should be ongoing due to the clear benefits, while research continues to explore the nuances of this fascinating phenomenom.27 Understanding the biology behind this phenomenon will hopefully take the guesswork out of it in the future.

In considering how photobiomodulation can be incorporated into our aesthetic practice at present and in the future, PBM would be an excellent candidate for combination therapies. It can easily be used in conjunction with systemic and topical treatments. The devices are sometimes portable and generally easy to use, at home or in the clinic. There are fascinating applications for wound healing, which could be used to accelerate recovery after aggressive aesthetic treatments. The potential anti-inflammatory effects could also have implications for a variety of skin pathologies, with work currently being done in psoriasis and eczema.10

In conclusion, there are several key areas that need to be clarified in order to fully utilise this exciting mechanism for the benefit of skin health. There needs to be consistency and a clear rationale behind the choices of optical parameters for different treatment modalities – all of which requires more research. There are multiple photoreceptors that could be involved in receiving the infrared to visible spectrum of light. While there has been some fascinating work done in trying to describe the underlying biology of these reactions, the proposed mechanisms do not yet explain the full extent of the physiological activity that is observed.

However, while our knowledge expands and refines the use of PBM in the future to be even more effective for our patients, the evidence currently suggests that we should continue using this powerful tool in clinic.