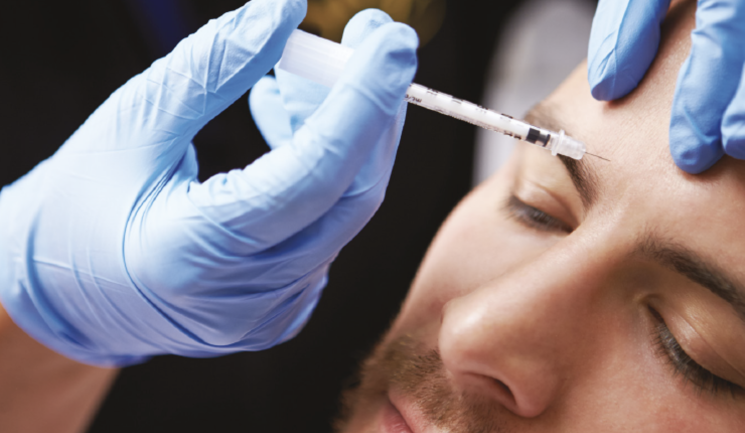 The desire for flawless skin is apparent to all working in the aesthetics and skincare profession and, in my experience working in an aesthetic practice, oily skin and subsequently large pores is one of the most common dermatological complaints made. A novel therapeutic option for targeting oily skin involves intradermal injection of botulinum toxin; studies have demonstrated this to be effective and safe, with minimal systemic or local side effects.1,2,5,7 This article aims to explore the evidence base for the efficacy in using botulinum toxin for treating oily skin and its mechanism of action, alongside its safety profile.

Sebum provides a physiological function, which is to lubricate the stratum corneum. It is composed of various fatty acids, wax esters, triglycerides, cholesterol and squalene. This aids in acting as a water-proof barrier in protecting the skin against friction, enabling the transport of antioxidants into the skin, aiding wound healing and possessing anti-microbial activity.4 However, when produced in excess, sebum can predispose to acne vulgaris (acne).2 Although a common complaint amongst those with acne, oily skin and large pores can also affect those without this condition, expanding the breadth of people affected. The primary complaint tends to be of skin which appears ‘greasy’, worsening throughout the day. Sebum production varies between individuals. Several factors put one at risk of excess sebum production from the sebaceous glands. For example, hormonal pathology such as androgen-secreting tumours, congenital adrenal hyperplasia, peri-ovulation, gender (men may have excess sebum production due to increased testosterone levels), as well as warm and humid climates can all affect sebum production.1

Sebaceous glands are holocrine glands in the mid-dermis; they produce sebum via intentional self-destruction of the sebocyte which forms the main cellular unit.3 They are usually associated with a hair follicle and an outlet, together forming the pilosebaceous complex.3 They are found across the whole body in varying densities. Unsurprisingly, acne-prone areas such as the face, upper chest, back and scalp elicit the highest density and, in contrast, there is a relative absence across the soles of the feet and palmar areas.4

The distribution of sebaceous glands, and consequently increased sebum production, can lead to oily skin, particularly in the ‘T-zone’ of the face, where the density of sebaceous glands is as high as 300-900/cm2.5 Sebum activity is partly hormonally driven, under androgenic influence.3 In the neonatal period, sebaceous gland activity is high, and then gradually reduces until increasing drastically around puberty.1,4 Although the total number of sebaceous glands remains fixed throughout life,3 they increase in size at adolescence, producing more sebum.6 Sebum production declines in the peri-menopause, or in the sixties or seventies for males.1

The majority of treatments for oily skin and large pores are either topical or systemic therapies. Topical therapeutic agents include retinoids (both natural and synthetic derivatives), with systemic treatments involving medications such as the oral contraceptive pill, spironolactone, isotretinoin, as well as laser and photodynamic therapy.1 Isotretinoin is thought to be the most effective therapy for treating oily skin. It is also known as 13-cis retinoic acid and acts to reduce the secretion of sebum from the pilosebaceous unit as well as leading to a reduction in size of the sebaceous glands.1 However, due to its side effect profile, many patients find its use difficult to tolerate.2 For example, patients tend to complain of troubling xerostomia, alongside dry eyes and xerotic skin which, in severe cases, can lead to superimposed skin infections.1 Research has shown intradermal botulinum toxin to be an encouraging treatment option.7

Botulinum toxin, a potent neurotoxin, is derived from the bacterium Clostridium botulinum.

There are seven subtypes identified (A-G) with botulinum toxin A and B being more widely used in the commercial setting.8 Botulinum toxin blocks transmission of the neurotransmitter acetylcholine into the synaptic cleft, preventing it from binding to the post-synaptic membrane and enabling subsequent muscle relaxation; this aids in reducing the appearance of fine lines and wrinkles. Specifically, it cleaves to proteins, which assist in fusion of the acetylcholine-containing vesicles to the presynaptic membrane, disabling the neurotransmitter release.1

In this section, I will explore all the studies published to date, to my knowledge, which have aimed to elucidate a role for the use of botulinum toxin in the treatment of oily skin. Note that the studies discussed are taken from what is freely available, and so may include information obtained from abstracts only.

In an early retrospective study conducted by Shah in 2008 involving 20 patients, botulinum toxin type A was injected intradermally into sebum-prone areas of the skin on the face (the ‘T-zone’). At one month, 17 of the 20 patients noticed a significant reduction in facial pore size and sebum production, with photographic evaluation supporting this and no reported complications. Of note, this study was retrospective and lacked an objective measure of sebum control.2,7

More recent evidence has further supported this treatment approach. In 2013 Li et al, conducted an in vitro study which demonstrated that sebocytes express a nicotinic acetylcholine receptor α7, with a dose-dependent increase of acetylcholine on lipid synthesis. They further recruited 20 volunteers into a split-face study (double-blind, placebo-controlled), finding a marked reduction in sebum production on the botulinum toxin treated side of the face.9 It is possible that botulinum toxin reduces sebaceous gland activity via blockade of acetylcholine receptors concentrated in the pilosebaceous unit.1,2

Rose and Goldberg further investigated this in 2013 by conducting a prospective study to elucidate the efficacy of intradermal botulinum toxin injections in treating excess sebum production from the forehead. They recruited 20 female and 10 male participants (two were lost to follow up). They utilised abobotulinumtoxinA (Dysport) and injected three to five units intradermally at ten points positioned horizontally across the upper third of the forehead, using a 30 gauge needle. This cohort was subsequently followed up at one, four, eight and 12 weeks. Photographs were taken and sebumeter readings were recorded, providing a more objective assessment. The results showed a significant reduction in sebum production in all participants across all follow-up visits (p<0.001). Sebumeter readings demonstrated a 75% reduction in sebum produced at week one, 80% reduction at week four, 73% at week eight and 59% at week 12. Assessment of the photographs demonstrated an improvement in pore size and all patients reported satisfaction with results achieved.2

The increase in dose did not appear to make a difference with regards to sebum regulation, thus this effect was not found to be dose-dependent. They did find there was an increase in sebum levels at a more peripheral radius of 2.5cm at two, four and eight weeks in these participants. The authors noted that the toxin may diffuse into the dermal layer following an intramuscular injection into the frontalis, inhibiting acetylcholine signalling within the pilosebaceous unit. Direct intradermal injections may therefore be more effective in treating oily skin than intramuscular injections.5

Results demonstrated a significant reduction in sebum production within 0.5cm of each of the five sites injected

When treating patients using botulinum toxin, the aim is to target the pilosebaceous unit, which sits intradermally. If the product is placed too superficially, it is unlikely to yield a significant effect in reduced sebum levels. It has been suggested by some studies that injecting at an angle of 75 degrees may aid in ensuring intradermal placement, thus avoiding inadvertent muscle paralysis.10 This is particularly pertinent in treating the perioral region and the cheek region, where paralysis of skeletal muscle is undesirable and can lead to loss of function. Some studies have also mentioned correct placement of botulinum toxin can be confirmed by extrusion of the product is from surrounding pores. This was used as an end point in Rose and Goldberg’s study.2

The studies mentioned in this article do not report any major complications. However, in Rose and Goldberg’s study, two subjects reported reduced frontalis muscle tone at two months.2 Therefore, although a low-risk treatment, optimum injection technique is crucial in both effectiveness and in minimising inadvertent intramuscular placement.10

Excess sebum production and the appearance of ‘greasy’ skin is a common complaint with consequences such as acne vulgaris, as well as having a psychological impact on patients. Intradermal injection of botulinum toxin to target sebaceous glands is a treatment option which deserves consideration in selected patients, with research thus far being encouraging. This method could prevent patients from undergoing systemic therapy where the side effects are greater, putting forward a lower risk alternative. The studies mentioned highlight patient satisfaction, but also statistically significant results from more objective assessments. Further research that explores its effectiveness, dose and placement would help to consolidate the current evidence-base.1,2