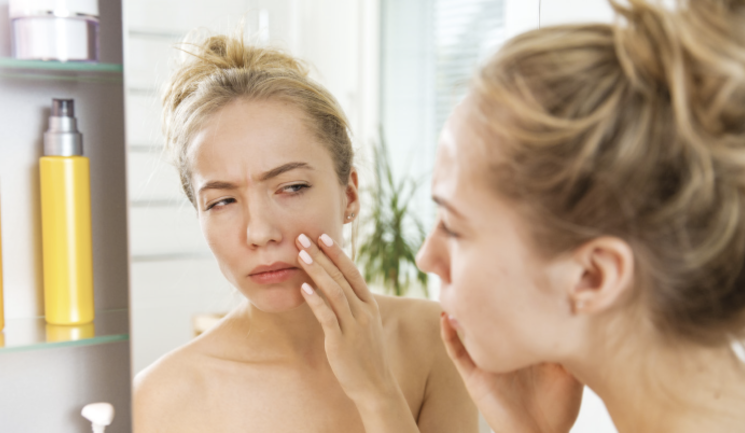 Last year, digital healthcare company Forth conducted a study amongst 2,000 British individuals, which discovered that more than a third feel stressed for one full day every week, and up to nine days each month.1 Additionally, the UK’s Mental Health Foundation found in a UK-wide survey that women are 17% more likely to experience these feelings than men.2 In this article, I will define and discuss the different types of stress and ageing, and provide evidence to support how physiological stress responses can accelerate specific ageing processes.

The term ‘fight or flight’ originated in 1929 and was used as a universal term to describe historical animal and human responses to threat, based on universal instincts for survival and for which living creatures had adapted over many centuries.3 The sympathetic branch of the autonomic or involuntary nervous system is activated during threatening scenarios, leading to complex chemical responses causing visible stress responses such as sweating, pupil dilation and trembling, as well as internal bodily changes including bronchodilation to increase gaseous exchange, tachycardia, raised cardiac output and heightened blood glucose levels.4

Today, stress has been described by the Mental Health Foundation as, ‘Our body’s response to pressures from a situation or life event.’ If our stress response is activated repeatedly or it persists over time, the effects can result in wear and tear on the body.5 It was also described by psychologist Dr Gillian Butler as, ‘A particular relationship between the person and the environment, appraised by the person as taxing or exceeding his or her resources, endangering his or her wellbeing’.6

According to primary healthcare company Copeman Healthcare, stress can often present itself in many forms including:

Interestingly, the three most commonly reported UK stress triggers are financial concerns, work and health worries.1 Stress varies based on an individual’s perception of what is stressful and their perceived abilities to cope. Human sympathetic nervous system stress responses are designed for short term situations and vary widely depending on individual perception, suggesting that one person may cope better than another when placed under the same stress and whether the stress is acute or chronic. If it exceeds the body’s ability to respond, system damage can result.3,7 A study that compared hair cortisol concentrations (HCC) in both identical and non-identical twins demonstrated that stress perception and responses are hereditary.8 The study shows that in 72% of subjects, HCC was an inherited trait.

The research also provides evidence of a link between perceived stress, neuroticism and depressive symptoms with genetic factors. Although more large scale, long term studies are required, these findings highlight that stress perception is part of our genetic makeup and will likely vary widely between individuals.8

Skin ageing due to stress

There is much evidence to suggest that both acute and chronic stress directly impacts skin’s ageing processes.9-12 This is caused by hypothalamic-pituitary-adrenal (HPA) axis disruption, leading to neurogenic and inflammatory response triggers at skin level.13 Additionally, skin actively participates in the body’s stress response.14 The main clinical symptoms of skin ageing are wrinkle formation, hyperpigmentation and loss of elasticity.15 Skin and its appendages are highly sensitive to environmental changes and act as stress and anxiety response mediators.14 Causes of ageing can be classified into two categories:

The classification of stress is also two-fold:

One controlled murine study demonstrated that a stressed mouse group developed UV-induced neoplasia at a much faster rate compared with the non-stressed control group.18 With this in mind, when assessing patients for stress levels, it is important to explore their exposure to physical stressors including UVA and UVB light and air pollutants including carbon monoxide, cigarette smoke and sulphur oxide, which in combination with stress may further negatively impact skin’s ageing process.19-21

Cortisol is the primary human stress hormone, and when its levels are heightened, epidermal and hair follicle keratinocytes, melanocytes, sebocytes, and mast cells respond via the HPA axis by secreting corticotropin-releasing hormone (CRH).22

CRH is pro-inflammatory, acting to prevent keratin cell synthesis whilst promoting mast cell degranulation.23 Under these circumstances, melanocytes and dermal fibroblasts increase production of adrenocorticotropic hormone (ACTH) and corticosterone, creating a chain where interleukin-18 production in keratinocytes, alongside melanocyte cell production, is stimulated.22

Melanocyte production is further accelerated by raised levels of alpha-melanocyte stimulating hormone (a-MSH).14 Although minimal, there is evidence to suggest a link between sudden onset of human melasma and acute emotional stress.24 Adding to this is heightened TYR gene activity, coded to promote further melanocytic proliferation through production of tyrosinase, leading directly to hyperpigmentation.25

Rhytids form where there is reduction in dermal and epidermal thickness.26 The rhytids may be static (visible without expression)27 or dynamic (observed at all ages and appearing with expression).28 There is evidence that suggests links between stress-induced inflammation and mitochondrial defects, directly contributing to wrinkle formation.9 Mitochondria can be described as the ‘power house’ of cells as they manufacture energy to drive all cellular functions, so it follows that mitochondrial disturbances disrupt protein production, leading to decline in autophagic degradation and an increase in reactive oxygen species (ROS), cellular organelle deterioration and ultimately, mitochondrial DNA (mtDNA) damage.29

One study provided evidence that depleted mtDNA function produced in mice through induction of dominant-negative mutation in the polymerase domain of POLG1, alongside the introduction of doxycycline to further impair mitochondrial function, directly resulted in formation of wrinkles and inflammatory infiltrate at histological level; interestingly, with the removal of doxycycline the murine mtDNA disfunction was reversed over a one-month period.9

Loss of elasticity and dryness

Human and murine studies have provided evidence that stress impacts skin barrier function, causing it to heal poorly and appear flaky, dry, dull and more noticeably wrinkled.32,33 The exact mechanism is unknown, although lipid production is an essential part of restoring and maintaining stratum corneum health and integrity, and there is evidence to support that stress-induced corticosteroids inhibit lipid synthesis by reducing lamellar body number.34 Elastin and collagen are structural proteins produced in the dermis by fibroblasts, which help to maintain skin firmness.35 Reduction in these fibres results in skin laxity, giving an overall impression of ageing. Raised calcium levels caused by heightened epinephrine disturbs fibroblast function and thereby collagen and elastin synthesis.36

Many patients lead a busy and stressful life and some of my patients often arrive breathless, barely able to speak having just served dinner and put the kids to bed, or having rushed from the station after a twelve-hour working day, for example. Some have even arranged an appointment with me at 6.30am to accommodate family and work commitments. Assessing patients’ behaviours and state-of-mind clues, as well as what they are saying, must be an integral part of the consultation process; patients may appear well on the surface but may be experiencing mental, emotional or behavioural stress symptoms in their every day lives.42 Looking for signs of extreme stress will help to maintain best practice, including patient safety.43

For this reason, when assessing patients I have switched to a holistic consultation process, encompassing the usual relevant medical history but also questions about their lifestyle factors such as diet and sleep patterns, emotional intelligence, and coping mechanisms. This allows me to create an appropriate treatment and advice package as, in my experience, the patient’s mental state can very much determine how they react to a treatment. For example, a highly-stressed patient may be hyper-reactive to a chemical peel due to presence of a compromised skin barrier.32,33

This study aimed to pave the way for practitioners to better understand the pressures of their patients during and after cosmetic injectables, and create a heightened sense of accountability for these potentially vulnerable patients. As observed in several studies, one extra, perceived pressure on top of an already heightening mountain of stress can have huge consequences for health and wellbeing.6,7 For a patient screened and identified as highly stressed with recognised symptoms,42 I would recommend an initial exploratory and educational chat to identify potential triggers and ways which they can unwind at home first – using lavender essential oil at bedtime for example, or maybe getting their skin conditioned before considering injectables with a course of pampering facials.

One study found that patients exposed to lavender essential oil during botulinum toxin injections had reduced heart rate post treatment, compared to the control group.44 For this reason, I always burn lavender essential oil in clinic. Another important factor to consider is the effect of chronic stress on the body’s immune responses. According to a study conducted by Maddock and Pariante in 2001, there is evidence to suggest that biofilm formation following dermal filler treatment is more likely to occur in patients with low immunity.45,46 Furthermore, their skin barrier may be impaired, leading to delayed healing times.32,33 For this reason, I do not advocate use of dermal filler to treat a patient exhibiting signs of profound stress and anxiety.

Many of the physiological studies I have drawn upon here are murine-based, highlighting a need for more human studies. Research has demonstrated that physical, combined with emotional stressors, profoundly heighten skin’s inflammatory response, so it is imperative to remind patients to wear daily sunscreen throughout the year. We can’t see stress, but successful treatment outcomes for patients must involve more than treating the evident facial ageing; a comprehensive and holistic initial consultation looking at lifestyle factors with stress and anxiety assessment is a must.