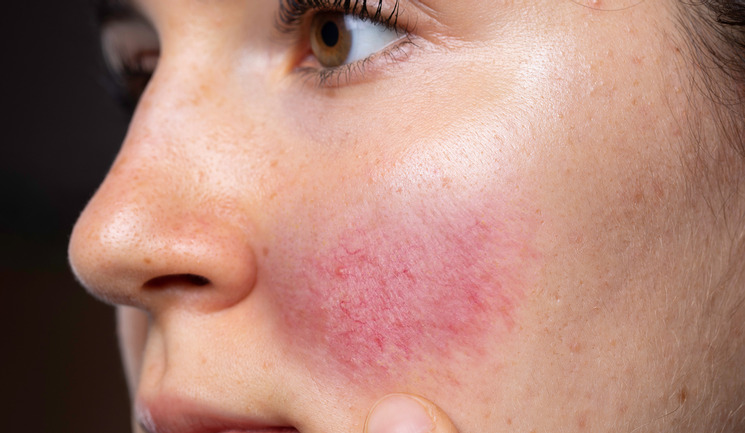 Rosacea is a chronic relapsing inflammatory skin disease with a high prevalence worldwide.1 Recent research suggests that dysregulation of innate and adaptive immune pathways as well as neurovascular changes is present, with different degrees of importance in the various subtypes. Neither the aetiology, genetics nor pathophysiological basis of the vascular, inflammatory or fibrotic changes is well understood.1

Rosacea symptoms consist of telangiectasia, erythema papules and pustules, and in some situations, it can affect the eyes.2 It tends to develop gradually, with first symptoms often appearing around age 30. In a survey of 1,391 rosacea patients conducted by the National Rosacea Society (NRS), 43% of patients said their rosacea first appeared between the ages of 30 and 50, while 39% reported that the disorder occurred after age 50 and 17% said they developed rosacea prior to age 30.3

Rosacea can affect anyone, no matter their race, gender, or nationality. It is estimated that around 10% of UK population is affected by rosacea.4 Commonly there is higher prevalence in women than men; however, men tend to have more severe symptoms like development of rhinophyma. There are theories that this is linked to male hormones, although there is currently not enough supporting evidence.4,5

Rosacea can have a significant impact on a patients’ quality of life. Studies that focused primarily on a rosacea population which sought care by a physician found that rosacea has a profound effect on the psyche.6,7 These studies demonstrated tendency toward auto aggression and self-accusation, low tolerance for frustration and predisposition to the development of depression.7 As such, it’s important for aesthetic practitioners to be aware of how to treat patients in the safest and most effective way possible.

Diagnosis of rosacea is challenging, and currently there is no specific test to confirm the condition. Doctors and aesthetic practitioners have to rely on the examination and an in-depth consultation. Occasionally, we can run tests like a skin biopsy or blood test to exclude lupus or psoriasis. Because the potential manifestations of rosacea are so numerous and varied, the National Rosacea Society Expert Committee concluded that global assessment can be most easily and meaningfully performed by subtype. The standard classification system established the following subtypes of rosacea:8

From my experience at the clinic, IPL can bring relief to facial flushing or burning as early as a single treatment

Rosacea is chronic condition and as such there is no cure for it, so recurrence and exacerbation are common. Therefore, treatment for rosacea often focuses on controlling signs and symptoms, and commonly this will require combination therapy and educating the patient in regards to lifestyle factors. Common triggers are exercise, sun and wind exposure, hot weather, stress, spicy foods, alcohol, and hot baths. Swings in temperature from hot to cold or cold to hot can also cause a flare-up of rosacea.9

Intense pulsed light (IPL) technology is well accepted in the medical aesthetic field for the treatment of vascular lesions. The light penetrates into the skin and is selectively absorbed by lesion chromophore. Absorbed energy is converted into heat, coagulating the lesion, which naturally fades following the treatment.10 IPL is my preferred first choice of treatment for many patients, especially for rosacea subtype 1 and 2. From my experience at the clinic, IPL can bring relief to facial flushing or burning as early as a single treatment. Depending on the subtype and severity – adding oral or topical prescription medications is often required on top of IPL treatment. I commonly use prescription medications (like brimonidine), oral (lymecycline or doxycycline) or topical antibiotics (azelaic acid, metronidazole, ivermectin) to reduce flushing.

At my clinic we have a holistic approach to the treatment of rosacea. The typical patient will have often already visited a few doctors and tried variety of treatments, usually with minimal results. Most of the patients already feel very low due to the appearance of their skin and have a very sceptical approach to the treatment as most of previous attempts failed. We start with an in-depth consultation, where we cover their lifestyle, diet, possible triggers and previous treatments. We are very clear in our consultation that rosacea is a chronic condition with no cure, so as to manage patient expectations, but explain that facial symptoms might be well controlled with our treatment protocol and other lifestyle changes. Most of our rosacea patients are placed on medical-grade skincare. The pH formula chronic redness range (homecare kit as well as in-clinic facials regime) is excellent and thanks to it, I often avoid prescribing oral or topical antibiotics.

At my clinic we developed internal protocols for our IPL system, and every treatment is customised with a different number of pulses, duration of pulses or wavelengths. Typically, one to six sessions are needed, although this depends on the severity of rosacea, with the average patient having three sessions. Treatment takes about 40 minutes per session, and we recommend an interval of three to four weeks between treatments.10 Most of our patients have minimal downtime; mainly redness is reported with occasional mild bruising (in more severe cases of rosacea). Other side effects can include bruising, swelling, pigment changes or scarring, but the risk of these can be minimised if the practitioner has been trained in the device sufficiently.

A 51-year-old female patient presented to my clinic with rosacea subtype 1. The patient had suffered from telangiectasia, flushing and persistent central facial erythema for more than 20 years. Transient papules were also common over the years. Prior to her appointment the patient had been unaware of her rosacea diagnosis and had presumed it was a genetic problem, as her other family members exhibited a similar appearance. As such, she had no history of previous treatment. During her first treatment with the Lumecca IPL system the patient had only a single pass with an energy of 13J (her skin felt sensitive when I attempted to increase energy or to do a second pass). For the second treatment, the first pass was 14J, and the second 16J. The second treatment was much better tolerated. Immediately after she experienced mild erythema, but this subsided within 20 minutes. The patient underwent a third treatment (two passes at energy 16J), afterwards stating a complete resolution of facial erythema and telangiectasia. The patient was instructed that to maintain results, a treatment once a year is typically required.

A 26-year-old female patient contacted my clinic with no prior diagnosis and concerns over facial redness, flushing and facial burning, especially after using daily skincare. She also reported having facial flushing for years. This was initially very intermittent, but had become persistent in the past six months.

Her main concern was significant discomfort after applying any skincare or makeup, and she reported a low mood due to her ongoing skin problems. The patient also reported early formation of pustules. After an examination I diagnosed her with rosacea subtype 2, and she was treated with two sessions using the Lumecca device.

Both sessions used a single pass with an energy of 12J. She reported that the burning sensation improved after her irst treatment. Additionally, the patient started using medical-grade skincare.

It has now been nine months since the treatment and the patient has reported no relapse in her condition.

Rosacea is chronic skin disorder with multiple challenges, for both patient and practitioner. A holistic approach, combined therapies, as well as addressing possible mental health issues is needed. IPL therapy is a very effective treatment for rosacea and in my experience, provides significant improvement for the majority of patients, even with a single treatment.