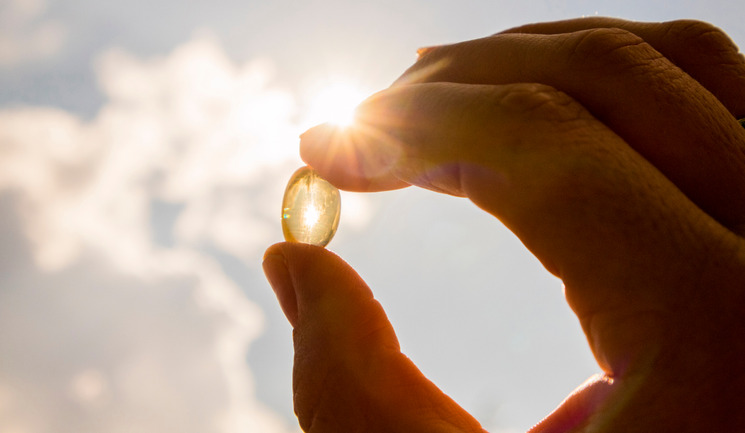 With the easing of lockdown restrictions over the summer, many of us took the opportunity to enjoy the outdoors, or even take a short break to a hot country to enjoy the sun. Interestingly, the British Skin Foundation suggested that even through the first UK lockdown many were getting more sun than usual, spending more time on balconies, in gardens, outside queuing for shops, or taking exercise.1 So most of us will have topped up our vitamin D levels for this winter.

Did you know that as well as being important for calcium and bone metabolism, vitamin D has important benefits on skin health and the maintenance of a healthy skin barrier? In winter, problems of skin barrier compromise present more frequently to us in our clinics and in our patients. In this article we explore the important role of the ‘sunshine vitamin’ on skin health.

Vitamin D is not a true vitamin. It is more accurately described as a steroid prohormone due to the fact that vitamins are defined as organic (carbon-containing) chemicals that must be obtained from dietary sources because they are not produced by the body’s tissues.2 Vitamin D is primarily produced in the keratinocytes of the epidermis of the skin.

Very few foods contain vitamin D (namely egg yolk and fish) so it is difficult to get sufficient amounts from our diet, hence why some foods in the UK (for example soya drinks, cereals and some fat spreads and orange juices) are fortified with vitamin D.3,4 Vitamin D exists in two forms: cholecalciferol (vitamin D3) which is produced by the skin and found in animalderived dietary sources, and ergocalciferol (vitamin D2) which is obtained from plant-derived dietary sources.5 Both forms need to be converted by the body before use and both forms have near identical functions, so they are often referred to under the umbrella term ‘vitamin D’.

In the presence of exposure to UVB radiation,6 7-dehydrocholesterol (7- DHC) which is found primarily in the keratinocytes of the stratum basale and spinosum cells,7 is converted to vitamin D3 (Figure 1). Both vitamin D3 and dietary vitamin D2 enter the bloodstream and are transported to the liver by a vitamin D binding protein.7 In the hepatocytes, extra oxygen and hydrogen molecules are added to vitamin D and it is hydroxylated to form 25-hydroxyvitaminD.2,5,6,8 This form of vitamin D is the major circulating form of vitamin D and is what is measured to determine vitamin D status.9 25-hydroxyvitaminD is still inactive and requires a second hydroxylation step in the kidney to convert it to the active 1,25 dihydroxyvitaminD (calcitriol). Calcitriol then acts on vitamin D receptors (VDR) throughout the body to exert its effects.9

Keratinocytes are unique in that they are the only cells in the body that can synthesise vitamin D from its precursor 7-DHC and also convert this vitamin D into its active form.9

These processes are important in the maintenance of a healthy skin barrier as the more mature keratinocytes in the upper layers of the epidermis produce lipids, glucosylceramides and proteins, which help to form the physical barrier of the skin, protecting it from entry of microorganisms and toxic chemicals. Research has demonstrated the safety and efficacy of vitamin D analogues such as calcipotriol in treating plaque psoriasis, a condition in which there is disruption of the skin barrier.10,11 In vitro studies have also shown vitamin D to reduce squamous cell carcinoma by inhibiting cell proliferation, by apoptosis and by promoting repair of UVB radiation-induced DNA damage.12,13

Vitamin D modulates the immune system and plays a role in defence against opportunistic infections. Various cells that act as part of the immune system of the skin such as monocytes, T and B lymphocytes and Langerhans cells express both VDR and the enzyme that activates vitamin D. Vitamin D inhibits activation and function of antigen-presenting cells (APCs) which dampens the immune response and therefore promotes immune tolerance.9,14

Vitamin D increases the production of antibacterial proteins cathelicidin and B defensin by keratinocytes.6,7 Antimicrobial peptides have antibacterial, antifungal and antiviral effects, attract immune cells to the site of injury and are important in wound healing.14,15

The keratinocytes of the outer root sheath of the hair follicle express VDRs. Activation of these via vitamin D promotes differentiation of the keratinocytes and inhibits their proliferation which affects progression of the hair cycle.16 Studies with mice that lack the VDR receptors have been shown to suffer from alopecia, suggesting that vitamin D is important for hair growth.17,18,19

Factors that affect the ability of the skin to produce vitamin D include:6,8

• Latitude: people living at higher latitude (where the intensity of sunlight is lower) synthesise less vitamin D in their skin compared to those living nearer the equator.

• Time of day: more vitamin D is synthesised in the keratinocytes during the hours of 11-3pm when the sun is at its most intense.

• Age: with age, the skin produces reduced amounts of 7-DHC. There are reduced numbers of VDR on intestinal cells and the body’s ability to hydroxylate vitamin D in both the liver and kidneys is also reduced, leading to increased likelihood of vitamin D deficiency.5

• Amount of skin exposed: the larger the surface area of skin exposed to sunlight, the greater the amount of vitamin D synthesis for a given period of time.

Skin of colour and vitamin D

Melanin in skin of colour absorbs UVB rays, thereby reducing the amount available for vitamin D synthesis in the epidermis. As a result, individuals with naturally darker skin tones require at least three to five times longer UVB exposure to make the same amount of vitamin D as individuals with fairer skin.20 Therefore, vitamin D deficiency is more common in skin-of-colour patients. As aesthetic practitioners, we should advise our skinof-colour patients of an increased risk of vitamin D deficiency and advise that they follow Public Health England (PHE) guidance regarding the consideration of oral supplementation all year round.

We may also offer advice or sign post to resources which detail food that are rich in vitamin D.

PHE advises that in the autumn and winter (October to early March) when there is less sunlight, people living in the UK should consider taking daily vitamin D supplements as it is difficult to meet these requirements by eating food naturally containing or fortified with vitamin D.14

PHE also advises that people who have little or no exposure to sun, for example people with dark skin, skin which is always covered or who live in care homes, should consider taking vitamin D supplements all year round.14

The recommended doses are:14

• Children under one year: 8.5-10 mcg/ day (340-400iU/day) unless the child is consuming >500mls of formula milk a day as this is already fortified with vitamin D Vitamin D supplements may not be suitable for those who have an allergy to vitamin D, sarcoidosis kidney stones, hypercalcaemia, hypervitaminosis D, reduced kidney function, or liver disease.25,26

Vitamin D is mainly made by keratinocytes in the skin. As well as the commonly discussed role in bone health and calcium metabolism, it also has an important role to play in skin health. The role of vitamin D in skin biology and skin immune function is complex, however, what is clear, is that vitamin D is essential for the maintenance of a healthy skin barrier and it plays a role in several common dermatological conditions.