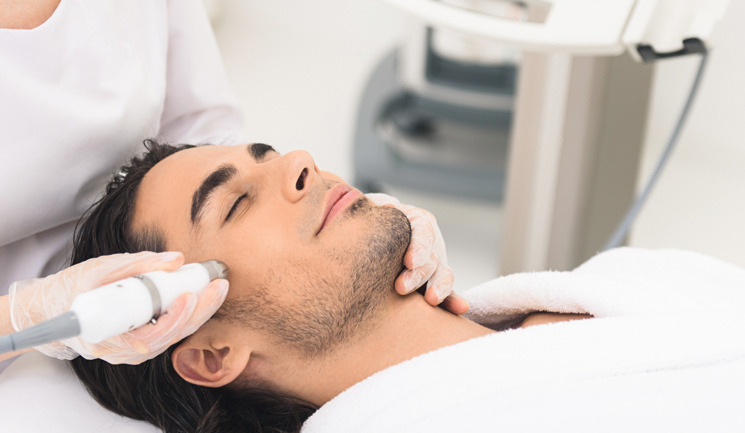 Aesthetic medicine is a rapidly evolving discipline with new products and technology appearing all the time and the availability and desire for treatments ever increasing.

Lasers have been used for cosmetic purposes for more than 30 years and there have been significant advances, meaning procedures are safer, more effective and there are more indications for their use. Lasers are used for various medical and cosmetic indications including permanent hair reduction, pigmentation, tattoo removal, skin tightening and collagen remodelling, removal of skin lesions, vascular lesions, scarring, thread veins and vaginal rejuvenation.1

The word laser is an acronym for light amplification by the stimulated emission of radiation, where light is part of the electromagnetic spectrum and includes visible light, ultraviolet and infrared wavelengths.1 There are many different types of lasers, dependent on the material used to create the beam, which may be a solid, liquid or a gas, and they all have common characteristics. Laser light is described as monochromatic in that it all belongs to a single wavelength on the electromagnetic spectrum, it is collimated so all waves are parallel, and it is coherent where all peaks and troughs of the waveform are completely synchronised.

Laser devices have many variables that can be controlled such as energy and fluence (the amount of energy per unit area), shape, size, stack (several shots fired in the same area), dwell time (the amount of time the laser is firing on one spot), shot density, and scan mode (generally linear, random, or scattered pattern of delivery of individual shots).1

Fractional laser creates tiny dots, leaving healthy surrounding tissue so that pain, recovery, and downtime is minimised. The beam density can be varied according to the area being treated and the outcome desired. Less than 10% of a targeted area is treated creating thousands of microscopic thermal zones in the skin which stimulates repair and regeneration of the whole area but leaving the stratum corneum relatively intact leading to little or no downtime following the treatment.2

Gender considerations when treating with laser

Male patients are particularly good canditates for laser treatment because. Male skin is thicker and heavier than females and facial muscles are stronger.3 Men are also less likely to follow a skin regime and use a sun protectant daily, leading to photoageing and the development of lines and wrinkles. In addition, when considering corrective treatments, although soft tissue fillers are an option, by adding too much volume or not considering male anatomy, there is a risk of feminisation and the amount of correction that can be achieved can be limited.3

Botulinum toxins are useful for the improvement of dynamic lines, but do not address static lines that are present at rest. In my experience, male patients also tend to favour procedures that produce minimal pain, little or no downtime and do not require strict aftercare protocols. As such, non-ablative laser tends to be the preferred option.

A 60-year-old male with Fitzpatrick skin type II and extensive dermatoheliosis presented to my clinic. He was concerned about his general appearance, but mostly the static lines and wrinkles over his cheeks, perioral and periocular areas. He had previously had botulinum toxin treatments, but despite this, many of the lines around his eyes had remained. He had no relevant medical history which would make him unsuitable for aesthetic procedures such as lasers.4

During the consultation, different treatment options were discussed. He lacked volume in the malar area and with some ptosis of the tissue, this created more pronounced nasolabial folds, which could be corrected with soft tissue fillers, but it was not felt that this would really address his concerns because the lines were too superficial. The use of hydrating and bioremodelling hyaluronic acid treatments was also considered, but the lines appeared a little too deep to address these.

This is because hydrating fillers improve fine lines and crepiness, but when there is extensive dermal damage and disruption, these products can only offer minimal improvement. He was also interested in a treatment that would be more longer lasting. Finally, we discussed the pros and cons of microneedling or non-ablative fractional laser and after understanding the procedure, the downtime, side effects, risks, complications and seeing some before and after photographs, we agreed that laser would be his best option.

The patient was provided with written information and aftercare and a patch test was performed. This did not produce any adverse effects and he was scheduled for treatment a week later. It is recommended to perform a patch test at least 48 hours prior to treatment for Fitzpatrick skin types I to III and for seven days in those with skin types IV to VI.5

After completing a consent form, the patient’s skin was cleansed and disinfected with a non-alcohol based antiseptic and a topical anaesthetic applied for 30 minutes. Treatment was carried out using the Juvium non-ablative Erbium 1550 nm laser. A non-ablative laser produces limited thermal damage without causing vaporisation of the tissue and has less downtime, complications, discomfort, and side effects than ablative lasers, although results obtained will not be the same as an ablative laser and more treatments may be required.6

A wavelength of 1550 nm is not part of the visible spectrum but in the infrared B band and is able to penetrate the epidermis to target water molecules in the dermis. It works on the principle of fractional photothermolysis, laser energy is absorbed by water molecules, producing heat and controlled trauma within the target area. This stimulates the body’s healing response, leading to collagen production and skin remodelling.6

Before we purchased this laser in our clinic, we used a fractional CO2 laser, however there is significantly more downtime, swelling, redness, visible dots on the face after treatment and a higher risk of burns and complications compared to our current device, hence the reason for switching. Results from treatment with both devices have been comparable.7 The procedure was performed using the AccuTip 10x10mm handpiece and the shape and size of the beam was adjusted according to the area of the face being treated to ensure full coverage with no overlap. The AccuTip is one of three headpieces that can be used, allowing a treatment area from 10mm to 20mm maximum size.

Cooling was applied during the procedure using the CryoShot, which can deliver a blast of cooled air up to -10oC for patient comfort. A medical plume extractor with 0.01 micron filtration was used as surgical masks alone are not sufficient to block nano-particles in laser plume, which may contain bacteria, viruses and blood.8

The patient tolerated the treatment well, with only minimal discomfort. Immediately afterwards, there was moderate erythema and visible reaction of some of the superficial blood vessels. A cooling hyaluronic acid mask was applied for 10 minutes and then a vitamin B5 serum and high-protectant (SPF 50) before the patient left the clinic. Most of the redness of the skin had settled by this time and the patient reported no inflammation, flaking of the skin or other adverse effect over the following days.

Aftercare advice included avoiding exfoliating products for a week, avoiding sun exposure and tanning for four weeks, and the use of a high protectant sunscreen. We recommended that the treated area should be cleansed with tepid water (hot water should be avoided for a few days after treatment) and gentle soap and patted dry before applying a simple moisturiser. I suggested that if he experienced any pain, swelling or inflammation, simple painkillers and cold packs could be used as required.9

The patient returned for a further two treatments at four weekly intervals using the same settings as the initial treatment. Before and after photographs were taken and the patient reviewed. Six weeks later, he was delighted with the results, felt that it had addressed his areas of concern and was keen to proceed with further laser treatment to maintain his results and for targeting the hooding of his upper eyelids. He has since recommended several other people to have this treatment.

The greatest complication from Erbium laser is the risk of ocular injury. 1550 nm can penetrate the retina and can cause complete and irreversible blindness and so it is essential that certified eye protection is used during the procedure and whenever the laser is in operational mode. Goggles with an optical density of at least five are required by the practitioner, and metal eye shields or disposable laser eye shields need to be worn by the patient. The room needs to be locked, or an interlock installed, and optimised for laser treatments by removing all reflective surfaces. Warning signs and lights should be present outside the room to alert people when the laser is switched on.

Erbium 1550 nm laser has a nominal ocular hazard distance (the distance where eye injuries can still be obtained) of over three miles.10 Other side effects and complications may include discomfort, which can be managed using appropriate analgesia, and redness, inflammation, and irritation which can be treated with cold packs, antihistamines and topical steroids if needed. Burns, blisters and crusting can occur if too much energy is applied to the skin, so topical medications and wound management may be needed.

However, minor episodes will usually heal spontaneously without any intervention. Hyperpigmentation may occur, but this is often temporary, and tyrosinase inhibitors should be considered pre-treatment in those individuals who are at a higher risk, and lightening creams may be needed if it has already developed.

Judicious use of a SPF 50 sunscreen will lessen this risk substantially. Hypopigmentation is also a documented side effect that can occur very rarely.10

Non-ablative Erbium 1550nm laser is a safe and effective treatment for lines, wrinkles and skin tightening. It is a particularly popular treatment for men due to it being virtually pain free, with little downtime, minimal aftercare and long standing results, not requiring regular maintenance treatments. It can be used complementary to other aesthetic procedures or as a stand-alone therapy. Several treatments are usually required but there is very little or no downtime or discomfort from the procedure.