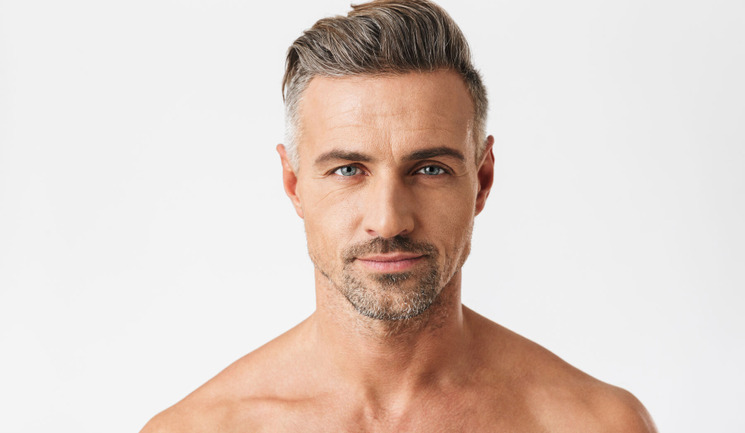 Despite this increasing demand, limited resources are available to help practitioners better understand male aesthetic ideals, as well as the best ways to deliver results for these patients in practice.

In common with many other species, humans demonstrate significant sexual dimorphisms, including differences in facial anatomy, and therefore aesthetic ideals between the sexes. The standards of beauty vary widely according to cultures, as well as over time, making objective definitions of beauty somewhat illusory.

Despite this, there have always been efforts to define beauty in a reductionist manner by using measurements and proportions. This approach was developed in ancient times, as far back as the Ancient Egyptian civilisation where there is evidence of ‘ideal facial proportions’ being used in the depictions of the human face.3

A limestone bust of Queen Nefertiti from 1350BC was carved using grids of equal-sized squares for symmetry, whereas Phidias, a fifth century BC Greek sculptor based his creations on ratios demonstrated by his ‘golden rectangles’.4 These so called ‘divine proportions’ have been incorporated into aesthetic models which divide the face into distinct facial units, and research has shown that ‘attractive’ male and female faces appear to have facial proportions closer to these divine values compared to ‘non-attractive’ faces.5,6,7

Vitruvius, the Roman architect from 75BC, was widely known for promoting a reductionist approach to what he described as ideal buildings. Friezes, columns and capitals were all carefully described as ideal ratios of proportions. Vitruvius extended this approach to consider what he believed were the ideal proportions of the human body and face. Vitruvius divided the face into horizontal thirds that are equal in size and volume; a concept taken up by Leonardo da Vinci’s Vitruvian Man, a practice which is still commonplace in today’s aesthetics analysis and treatment planning.8

Finally, another commonly used facial proportions concept is the neoclassical canon which divides the face vertically into fifths, with the ocular width, intra-canthal distance, and nasal width all measuring one-fifth.9

The general attractiveness of both sexes is traditionally thought to be linked to conformity to the aforementioned ratios, symmetry, youthfulness, as well as ‘averageness’ – all features which are thought to convey genetic stability and be a superficial sign of health, and therefore desirability in a mate.10 This aspect of male aesthetics is not too dissimilar to female aesthetics, and many practitioners will be well versed in the creation of more symmetry or youthful appearance for their patients.

However, a reductionist approach to male beauty is not universally acknowledged, and it is argued that beauty cannot be broken down into measurements and ratios. Nevertheless, there are some features that are different between genders and which are important considerations in male aesthetics.

Men and women have the same facial musculature, but men have larger muscle mass, often leading to more prominent dynamic facial lines as they age.11 The typical male upper face has a flat, straight brow lacking the arch seen in the lateral third of the female eyebrow.12 Additionally, the male brow is positioned low along the supraorbital ridge, with a mild brow ptosis considered to give an impression of power and leadership, whereas a more severe brow ptosis is seen primarily as a sign of anger.13 In the mid-face and cheek region, men have less superficial fat than women, giving rise to a relatively flat mid-face and less anterior cheek projection, and generally deeper wrinkles as they age.14

Male attractiveness though, additionally depends on displaying strong signs of gender dimorphism. Dimorphic features which define the male face include a broad forehead, prominent brow, broad squared chin, and a prominent jawline.15 From an evolutionary perspective, a male with a strong jaw, chin, and brow is at a relative selective advantage – these facial skeletal features are thought to provide better protection to their eyes and neck during hunting or fighting off a foe or beast.16

As much as trends, fashions, and cultures may vary over time, one could argue that the human primitive amygdala may subliminally continue to identify these features as inherently attractive.16

It is no accident that actors depicting prototypic masculine roles such as James Bond, or superheroes such as Batman or Superman, always score highly on the aforementioned male dimorphic features. There are also more objective studies which demonstrate that while we may have evolved beyond our hunter-gatherer lifestyles, such dimorphic male features still confer a selective advantage in the modern world. For example, male cadets at West Point Military Academy in the US were found to achieve higher military rank if they possessed dominant male facial features,17 and more ‘attractive’ male lawyers are more likely to achieve higher salaries.18

However, it is also clear that ideals of male beauty are constantly evolving with a move away from strength-based features to a more polished, groomed look, together with an increased acceptability for men to pursue an improvement in their appearance.19,20

Male faces require a fundamentally different aesthetic approach. While many aesthetic practitioners are well versed in the pursuit of symmetry and youthfulness in their female patients, great care needs to be taken when treating male patients so as to preserve, or even enhance male dimorphic features. So, with this in mind, what considerations need to be kept in mind when treating the male aesthetic patient?

It begins with marketing

The marketing strategy needs to also incorporate relevant signalling and information for male patients. There are many ways in which this can be achieved. At the extreme end is the creation of male-only clinics, or waiting rooms, but at the very least specific marketing material and/or patient education programmes, aimed at making men feel comfortable might be necessary steps. Many clinics and practitioners appear out of step with this need, with much of their marketing and web material identifying only female faces.

In our experience, men need to be reassured that they will not be treated in the same fashion as female aesthetic patients, and that preserving their masculine features is at the forefront of the practice ethos.

The most common male cosmetic treatment is botulinum toxin type A injections.21 The presence of larger facial muscles often requires higher doses of toxin to achieve the same effects observed in women.22 To avoid the higher risk of potential complications associated with injecting higher volumes of toxin, lower dilutions can be considered. In Mr Ezra’s experience, when treating forehead rhytids in men, the medial and lateral frontalis should be equally treated to avoid feminising the brow by creating a lateral arch. However, it must also be emphasised that treatment of the forehead should proceed with caution as male brows are heavier and lower, meaning that any weakness of the frontalis muscle is more likely to cause symptomatic brow descent.

Lateral canthal lines, or crow’s feet, in men often have a more inferior position due to a larger zygomaticus and a broader orbicularis muscle, requiring a more inferior and superficial injection site to address the wrinkles, while avoiding inadvertent treatment of the zygomaticus major which would cause upper lip asymmetry.23 When dealing with wrinkles in the male patient, the goal should not be to eliminate them, but to improve or reduce them, unless the patient expresses a wish for total elimination of these lines.

Filler can be used to augment male dimorphic features, such as chin or jawline augmentation which is increasingly popular with male patients wanting to achieve a more masculine look. Another common use of facial fillers in men is to soften deep lines in the glabellar and nasolabial fold regions. Great care needs to be taken when addressing any cheek volume loss as over-filling the male cheek can create a feminine rounded cheek projection.

It is worth mentioning that non-surgical treatments discussed here can and are increasingly used in the treatment of transgender patients to aid in their transition.24

Male engagement with aesthetic treatments has slowly been gathering pace. It would seem that across time and cultures, the prototypical masculine features described here remain the aesthetic ‘ideals’ for male beauty. While each patient is always approached as an individual with their unique aesthetic goals, it is of paramount importance to take great care in preserving or enhancing male dimorphic features when treating male patients.