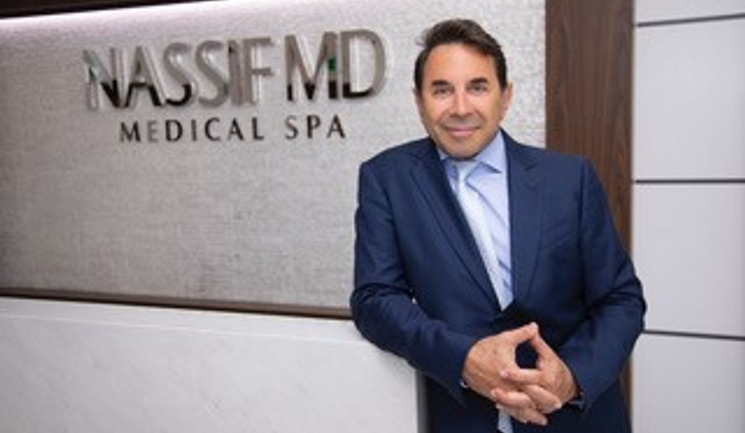 Fast forward to 2021, and he’s now a global TV star and an international multi-business owner. But how did he get there?

Dr Nassif notes, “Originally I wanted to get into otology, but during my training I was exposed to facial aesthetic surgery. I found it so interesting that it became my new passion. After I graduated as a medical student in 1992, I proceeded to do a facial plastic and reconstructive surgery fellowship at Saint Louis University School of Medicine. This led me to opening my own plastic surgery clinic in Beverly Hills in 1999.”

After 15 years of working in plastic surgery and seeing a huge rise in treatment popularity, as well as mishandled procedures, Dr Nassif partnered with his friend and fellow surgeon Dr Terry Dubrow in 2014 to create the TV show Botched. The programme focuses on correcting complications caused by surgical and non-surgical cosmetic procedures. On his decision to start the show, Dr Nassif says he wanted to help patients who otherwise wouldn’t have been able to afford to get their procedures corrected, as well as to educate viewers on the potential dangers of cosmetic surgery.

He comments, “There are many layers to the show. Firstly, it’s entertaining for viewers because we have a wide variety of people come on, all with their own stories to tell. Secondly, it’s rewarding for us, because we can help people who are negatively affected by their appearance. But the other side to it is that it’s communicating with the viewers what they should and should not do when it comes to invasive and non-invasive aesthetic treatments.”

He continues, “A lot of people that we see don’t do their research and tend to base their treatment decisions on cost rather than the quality of the practitioner or the safety of the procedure. Most people don’t even know what they should be looking for when selecting a practitioner! People really need to be educated in the realities of what can happen if they don’t look into things properly, and it’s down to practitioners to get that message across.”

In 2019, 21 years after opening his Beverly Hills office, Dr Nassif opened NassifMD MedSpa in Manchester, England. On why he decided to open a clinic in the UK, he comments, “The second largest audience for Botched is in the UK, and we actually have a lot of people fly over to be on the show. They regularly talk to us about the lack of regulation the UK industry has and how anyone can become an injector, which leads to a lot of complications from filler and botulinum toxin. It’s truly shocking to me! Of course, even the best injectors can cause a complication, but the important thing is being able to recognise and manage them.”

“I view myself as being an eternal student in this field”

He continues, “I wanted to do something about it, and provide patients with a safe and trusted place to get their treatments. When we were looking for UK locations, we found there’s actually a higher percentage of people in the North West getting non-surgical procedures than in London, so we thought Manchester was the best place for us!”

On whether he would open any more clinics in the UK, Dr Nassif comments, “London would definitely be the next step, but we need to get the world in order first and get everyone protected from COVID-19! The Manchester clinic is still very new, so I want to focus on that first before I branch out.”

As well as running two aesthetic clinics and being on TV, Dr Nassif has released his own skincare line, NassifMD Dermaceuticals, and has launched a skin booster with treatment brand HydraFacial. He says his decision to start working in skincare was because he sees it as an integral part of enhancing any surgical and non-surgical procedure.

He comments, “I can perform surgery on the face, but that in itself doesn’t take care of the fine lines, blemishes or sun damage many patients have. Because of this, I think it’s important to always make sure the patient’s skin is prepped prior to cosmetic procedures to ensure that the results are optimised. Before facial surgery for example, I often recommend patients start an exfoliation and hydration routine to help repair the skin and restore elasticity. While I can operate on the inside skin tissue, we need skincare products to take care of what’s on the outside.”

On what advice he would give to practitioners to help them become successful in the industry, Dr Nassif comments, “No matter how long you’ve been in the business, you should never stop learning. Even at this point in my life, I am still making changes to how I do my procedures. I view myself as being an eternal student in this field because I am always finding out ways to become better at my job. So, just keep working as hard as you can to improve everything you