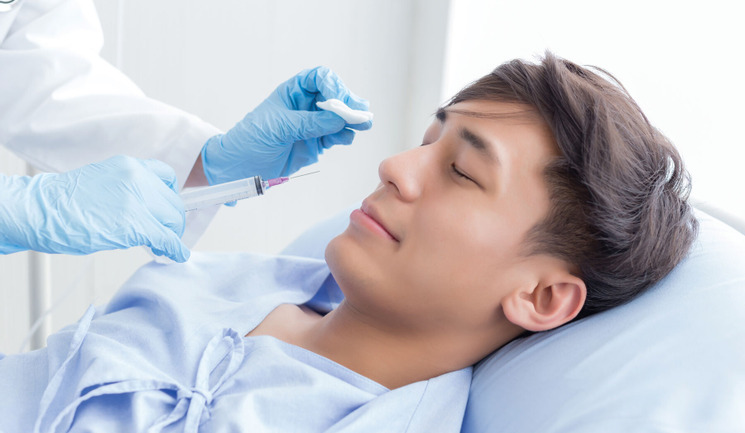 According to a report conducted in 2018 by the American Society of Plastic Surgeons, men had a total of 1.3 million cosmetic procedures (1.1 million minimally invasive and 215,000 surgical). Since 2017, 1.2 million Asian Americans have had procedures, highlighting a 1% increase. The top three minimally-invasive procedures included botulinum toxin type A injections, laser hair removal and microdermabrasion.1

This article will explore the demand for cosmetic procedures amongst East Asian men, the aesthetic ideals for this cohort and some practical tips for treatment using injectables.

In China, men account for 15% of its sizeable aesthetic medicine industry.2 The number of male patients who request cosmetic procedures, particularly non-surgical procedures, are increasing internationally.3-5 This necessitates an understanding of their motivations, expectations and the psychosocial science when it comes to male aesthetics.

The increased demand for cosmetic procedures among East Asian men has been linked to various factors. These included availability, normalisation and acceptance in society, enhanced self-confidence for both personal and professional life, workplace competitiveness, social and emotional competence, attractiveness, and youthfulness.6-10

The skeletal structure of the East Asian face results in a wide bizygomatic and bigonial width, which leads to a ‘square’ lower face and a wider, shorter face in comparison to Western skulls

Male attitudes towards cosmetic surgery are affected by low body image satisfaction, which is impacted by watching television and the use of social media platforms.11,12 However, it has also been reported that social media and television increase the acceptance of surgical and non-surgical procedures for both men and women of Asian origin to enhance or alter their physical appearance. Furthermore, there is an increasingly popular male beauty culture that includes male beauty products, cosmetic and skincare lines aimed at men, and male modelling agencies, which could also be having an impact.13,14

The impact of male facial masculinity on the perception of personality and attractiveness has been studied extensively in the context of evolutionary biology and reproductive strategy. Masculine facial features include a large jaw, prominent brow ridges, prominent chin and cheekbones, and a longer lower face.15-17 Other attractive features on men included clear skin, tattoos and tidy eyebrows, an obtuse jawline, a thin face, a round chin, and an elevated nose bridge.

Generally speaking, masculine facial features have been positively associated with various attributes, including testosterone levels, immunocompetence, health, and partner choices;15-18 however, it has also been reported that women usually prefer these facial features for short-term relationships and more feminine male faces are preferrable for long-term relationships.18 In addition to perceived dominance, hypermasculine faces are often associated with ‘coldness’ or ‘dishonesty’.19

Amongst females, masculine facial features appear to be differentially valued depending on such factors as the phase of the menstrual cycle/hormone levels (the hormonal theory of facial attractiveness) and the mating strategy.20,21 A study in 2010 reported that across 30 countries, independent of wealth and mating strategies, the preference for masculinity increased as the population’s national health decreased.22

Previous studies published on the ideals of beauty among Chinese individuals and aesthetic practitioners have reported that both men and women preferred an obtuse jawline for both sexes and a round narrow chin.23,24 These features represent a more feminine male face (Figure 1).

An unpublished online survey involving 643 Chinese participants showed that the majority of female participants’ preferences for male faces was influenced by current famous media or social media influencers.25 The female participants preferred a less prominent jawline in Chinese men, while Chinese men and women rated more feminine, Chinese and Caucasian male faces as most attractive and hypermasculine faces as the least attractive. Although many participants confirmed that their preference for facial attractiveness was influenced by current famous characters from film and social media, they did not necessarily want to look this way.

It has been previously reported that British and Japanese women prefer a more feminised male face.24 On the other hand, other research reported that homosexual men usually prefer masculine male faces and data suggests the attractiveness judgement of same-sex faces by homosexuals was not the same as those of heterosexual individuals of the opposite sex.26 Another study examined preferences for masculine features in faces, bodies, voices, and personality characteristics among homosexual men in China and reported preferences for masculinity among all four domains.23

The preference and quest for clear skin has its roots in Chinese culture and tradition. A fair, clear complexion has been associated with wealth and affluence.10,11This explains the large demand for skincare and laser devices to improve the skin’s appearance.

The skeletal structure of the East Asian face results in a wide bizygomatic and bigonial width, which leads to a ‘square’ lower face and a wider, shorter face in comparison to Western skulls27-29 The overly prominent zygomatic arches in the East Asian facial structure, along with the delicate central face topography (a small nose with a retruded forehead and chin), results in an imbalance and makes the face appear ‘overly rough, aggressive, and masculine’.30,31 Therefore, this has led to an increased demand by men for facial contouring surgery.31,32 Furthermore, non-surgical procedures are very popular in Asia. Taking into account the above findings, facial structure and morphology of East Asian men, the focus of injectable treatment is on facial contouring and anterior projection of the face.

Top tips for success with injectables

Treating East Asian faces requires a thorough understanding of the differences in ideals of beauty and beliefs, possible differences in anatomy and of the existing skeletal and soft tissue morphology. For example, different injection techniques may be required for botulinum toxin A and dermal fillers. In my experience, the frown line and forehead pattern are usually different from the most frequently recognised patterns taught and observed in Caucasians, hence require modified injection technique, dosage and pattern. Presentation of ‘bunny lines’ is very common in East Asians due to the nasal anatomy and morphology, and the interaction of the relevant muscles with the glabellar complex muscles.

This information is significant to aesthetic practitioners, not only in China and East Asia, but internationally as the Chinese market is part of the new increasing middle-class that is slowly becoming wealthier. These individuals either immigrate or travel abroad to seek cosmetic procedures. Aesthetic practitioners can increase their understanding of ideals within facial beauty among different nations, perceptions of attractiveness, psychological factors associated with the perception, and trends/changes over time. As such, the development of tailored communication, psychological skills training and treatment plans are needed to achieve results.