Using RF in the Periorbital Area 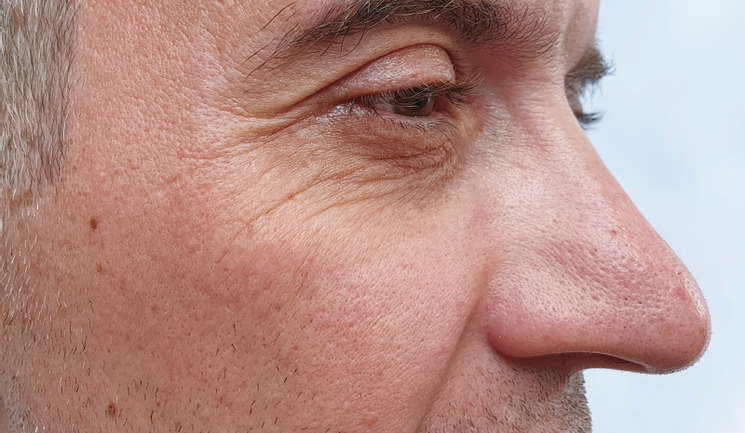 The demand for surgical intervention from male patients is rapidly increasing, and interest in non-invasive approaches has also grown. In fact, according to the American Society of Plastic Surgeons, there has been a 101% increase in men getting soft tissue fillers since 2000.1 What’s more, patient demand for non-surgical skin tightening with little downtime and preservation of the epidermis has increased 600% in the past 15 years.2

We’re also in a digital age now wherein patients of all genders are much more image focused, and the patients I see in my clinic are much more knowledgeable too. So, we are working with a much more informed population who are now able to research potential treatments thoroughly themselves.

For many of my male patients, I am particularly seeing an increased interest when it comes to non-surgical procedures for the eye area, which has been increasingly popular because of the requirement to wear masks.

Ageing of the periorbital area

The eyelids are the most delicate areas of the face due to their structural complexity and function, and the eyes are often an area that can first show obvious signs of ageing because the skin is typically thinner, more delicate and susceptible to structural changes around it.3 This includes things such as flattening of the mid-face fat pad, which can have a direct impact on its appearance, causing concerns like fine lines, dark circles, excess skin and prominent eye bags. Wrinkles are the most common complaint I am presented with, mainly due to the fact that the glabella and lateral canthal lines have been shown to be some of the most visible lines of expression that contribute to the aged appearance of the face.3

There are, of course, a number of modalities which we can use to improve various aspects of skin ageing. However, I am increasingly finding that radiofrequency devices offer an effective standalone treatment for treating lines in the glabella and lateral canthal area. It can also be used as a combination therapy for maximum results. For example, combining it with botulinum toxin or dermal filler injections.

While, traditionally, ablative and non-ablative lasers were the primary mechanisms to improve skin laxity non-surgically, these treatments came with associated risks such as burns and pigmentation changes.4

Alternatively, radiofrequency can be an incredibly effective, non-invasive treatment option. Resistance encountered by the RF energy flow causes a build-up of heat in the skin, which induces an immediate contraction of the collagen (an ‘instant lift’) and stimulates a natural wound-healing response, causing the production of new skin cells and collagen.5 When focused in the dermis and hypodermis, radiofrequency treatment can lead to improvements in the skin structure and tightening of lax and sagging skin.5

Typically, the most frequently reported side effects for this treatment are swelling and redness. These side effects usually dissipate within a few hours, but may last for a few weeks in extreme cases. Some patients have reported bruising as a result of their radiofrequency treatment, but again this is extremely uncommon.7

A 60-year-old male patient presented to my clinic with concerns surrounding the eye area. In particular, signs of ageing with a focus on fine lines around the eyes and crow’s feet. The patient hadn’t undergone any previous treatments and wanted a procedure that would have little downtime and give an incredibly natural and yet refreshed result.

The consultation began with a discussion about the possibility of using botulinum toxin to soften the lines as well as topical skincare. However, the patient ideally wanted a less-invasive no-needle treatment, and also requested something that would be fast acting without the need of multiple sessions.

I therefore suggested radiofrequency as an alternative. Although many radiofrequency treatments require multiple sessions, the technology I use called the Thermage FLX only requires one session, which appealed to the patient.

Firstly, the return pad was placed onto the patient’s skin around the eye. This is attached to the device to create a return path for the radiofrequency energy, which helps to prevent electrical burns.7 The treatment area was then mapped by applying a grid around the eye.

A coupling fluid was then put onto the skin; I have found that applying a generous amount of gel tends to reduce the patient’s discomfort level as it helps the handpiece to glide easily over the skin and distribute the energy evenly.

Using the device I targeted the specific eye areas of concern, and as this happened the patient described a succession of warm bursts onto the skin. This feeling is caused by the radiofrequency technology which heats the deeper, collagen-rich layers of the skin to offer a deep rejuvenation of tissues. The heat can be turned up or down according to the patient’s pain threshold, but I've found that the hotter it is, the more effective the treatment becomes. In this particular case, we were able to use the treatment at a high heat.

The one-off treatment took approximately 60 minutes, but the time may vary from 30-90 minutes in other areas depending on the size.

Immediately after the treatment finished the patient’s skin was slightly pink and a bit sensitive, which is to be expected. The patient was advised not to do vigorous exercise or come into contact with extreme heat for 48 hours to allow for the skin to recover. As well as the expected sensitivity, the patient commented that the skin felt noticeably tighter and smoother. The patient also noticed an immediate improvement in skin condition in this area, which continued to improve for the next six months.

Following treatment, the patient was advised to use a hydrating eye cream and the ZO Skin Health daily sheer broad spectrum SPF, due to its protection against both UVA and UVB rays and hydrating properties. I also schedule a follow-up consultation in nine months to see when another treatment would be needed. The results of the treatment are expected to last up to two years, but a follow-up consultation at nine months enables us to understand patient requirements and whether top up treatments are required.7

Radiofrequency treatments are an extremely effective non-invasive way to tighten skin around the eye area, with very little downtime. They’re becoming an increasingly popular alternative to traditional surgery as they can demonstrate visible results, which can last for up to two years. They also have a relatively short recovery period, which is especially appealing for male patients.