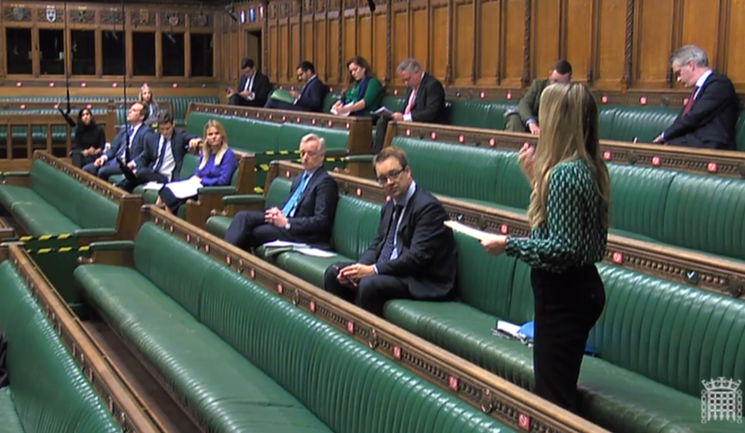 MPs have voted in favour of the Botulinum Toxin and Cosmetic Fillers (Children) Bill 2019-21 today following its second reading at the House of Commons.

The Bill will now move to the committee stage where clauses may be added and it will be considered by MPs in the House of Commons line-by-line.

The key points of the Bill aim to:

According to the Bill, medical professionals will not be liable if they can demonstrate a medical need for treatment, for example for migraines, or that they took reasonable steps to establish the patient’s age and reasonably believed they were aged 18 or over. Non-medical professionals will of course not be able to make a medical diagnosis and will therefore not be able to use this as a defence for treating under-18s.

Should the Bill become law, regulation will be enforced by local authorities that will be able to enforce unlimited fines.

The Bill was presented to Parliament by MP for Sevenoaks Laura Trott, who opened proceedings by highlighting the necessity for regulation surrounding aesthetic treatment to those under 18. She said, “Alarmingly, this is an unregulated area. The data we have on prevalence is very thin, but a survey in 2018 showed that 100,000 under 16s had undergone cosmetic enhancements, with the most common being fillers. This is not only worrying for the mental health of our youngsters, but is worrying for their physical health too.”

MPs were then invited to add their views, which were unanimously in favour of the Bill. Concerns were, however, raised with the fact that the regulation would only apply in England, leaving unscrupulous practitioners able to carry out toxin or filler treatment on under 18s in Wales, Scotland and Northern Ireland without repercussion, while also allowing the possibility of children travelling to these countries for treatment.

MP Simon Baynes for Clwyd South, a border town between England and Wales, had particular concerns with this. Discussion from his peers suggested working together and with the devolved parliamentary assemblies to introduce regulation in the other UK countries too.

MP Edward Argar, Minister of State for the Department of Health and Social Care (DHSC), then gave his support, commenting that the issue ‘unites the House, regardless of Party’. He said, “I hope this important Bill will receive the whole-hearted support of the House… this is an ever-expanding multi-million-pound industry and there is more work to be done to ensure it operates in a safe way. The physical and psychological implications of cosmetic procedures are not to be underestimated and need careful consideration.”

He continued, “This Bill rightly focuses on protecting young people from having botulinum toxin and fillers until they are fully able to weigh up these implications, and I support this aim. This Bill is the right thing to do. It represents an important and real step forward… I offer the Government’s full support for this Bill.”

MP Argar then added that the DHSC is also exploring a range of options for increased oversight of practitioners, including a system of registration or licensing.

MP Trott welcomed this update, before praising her fellow MPs for their support and insight, highlighting one of the most notable points to come out of the discussion was the impact social media has on those aged under 18 and their attitudes towards aesthetic treatment. She said that unfortunately, “My Bill will deal with the symptoms of the problem, but not necessarily the cause,” before emphasising the need to support MP Dr Luke Evans’ work on social media regulation.

MP Trott also emphasised that the issues discussed today do not just apply to young people, but those of all ages. She said across the sector more attention needs to be given to the importance of consultations, accountability and minimum qualification levels for aesthetic practitioners. She also noted that these discussions were not an ‘attack on the industry’, saying, “There are so many providers that are doing this well, looking after the people they are treating. But we must stop the ones who aren’t. We must make sure patients are protected and this must be true for people of all ages.”

Finally, MP Trott concluded, “We must stop the dangerous and unnecessary non-medical procedures that can ruin children’s lives. I welcome the Minister’s support today in that we’re now one step closer to achieving this and I commend the Bill to the house.”

MPs present then voted unanimously ‘aye’ in support of the Bill. A date for the committee stage is yet to be set.

The British College of Aesthetic Medicine (BCAM) has applauded the news, calling it a ‘welcomed step toward long-overdue tightening of regulation surrounding the accessibility of aesthetic interventions, particularly from non-medically qualified practitioners’.

BCAM president Dr Uliana Gout said, “BCAM fully endorses the Private Member’s Bill and increased regulation in our specialty. BCAM has a good professional relationship with the Department of Health and Social Care and just this week has agreed to extend our national audit data collection of aesthetic medicine to cover under 18-year-old patient treatments. This will support the information gathering efforts to generate national statistics in this critical area.”

BCAM chief executive Mr Greg White added, “Let us be quite clear – patient safety is paramount. Dermal fillers in particular are plain dangerous in the wrong hands. Protecting vulnerable patients is not optional. Our survey yet again underlines the vital issue of agreeing a wider regulatory regime, which supports controlled access to prescription medicines, and which differentiates aesthetic medicine from beauty therapists, spas and salons, which we continue to monitor and call out. The Bill is an important step forward which we fully support.”

You can watch the debate here and read more on the Bill and see its progress here.