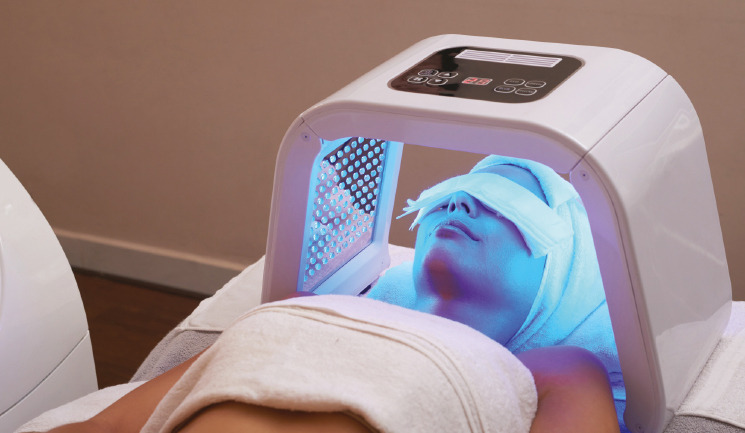 The rise in popularity of non-invasive treatments which improve the quality and condition of the skin continues.1 In particular, there has been a rise in the use of non-invasive devices, with a total of 280,815 procedures last year in the UK.2 Particular technology that I’ve found gaining momentum in my clinic is Light Emitting Diode (LED) phototherapy, which refers to the use of low-level light energy at defined wavelengths to elicit a range of cellular and regenerative benefits.3 The mechanisms of action are based on the same principles as photosynthesis, known as photobiomodulation, which means that light is absorbed by target cells to activate specific biological functions.4 In addition, there are multiple reported pathways by which clinical benefit is achieved.5 LED phototherapy positively impacts cellular metabolism by triggering intracellular photobiochemical reactions, which include increased adenosine triphosphate (ATP), modulation of reactive oxygen species, stimulation of angiogenesis and increased blood flow among others.6

LED phototherapy provides an affordable and effective option for practitioners, in part due to the diverse number of skin conditions it can treat, such as rosacea, acne, psoriasis, eczema, dermatitis, wound healing, dry/irritated skin (for both the face and body), musculoskeletal conditions, repair/regeneration at a cellular level.6 It is also suitable for all Fitzpatrick skin types.6 In contrast to traumatic ablative (e.g. laser resurfacing), and non-ablative (e.g. intense pulsed light) modalities, which induce secondary tissue repair by causing controlled damage, LED phototherapy is atraumatic and bypasses the initial destructive step by triggering regenerative processes within the skin.7 Successful LED treatment rests on many key factors aligning, and I find that practitioners often misunderstand the significance of correct wavelength, dose, energy and treatment time.

Here I will discuss some key considerations for successful treatment using LED in terms of wavelength, but dose and treatment are beyond the scope of this article.

There are many LED devices on the market and it’s key to understand the basics in determining the importance of clinically-proven wavelengths and how this impacts on the efficacy of the treatment.

This is a critical factor, as light is a powerful energy, and when it’s applied as phototherapy at a cellular level, it allows photoreceptors to absorb specific wavelengths.5 The correct wavelengths will ensure absorption of photons (light is made of photons-microscopic particles of electromagnetic energy), on the target chromophore.8 The waveband in which the wavelength of the photon is located determines not only which part of the cell is the target, but also the primary photoaction.7 There are other reported variables within the literature that can affect the outcome of treatment, such as the energy density, power density, total energy, tissue absorption characteristics, as well as the total number of treatments.9 The wavelengths with the strongest clinical evidence are blue light 415 nm, red light, 633 nm and near-infrared (NIR) 830 nm. In addition, another variable is time which is relative to the total treatment energy/ energy density.10

Blue light 415 nm wavelength delivers calming benefits to congested and acneic skin through its bactericidal action without irritation.11 Blue light at 415 nm stimulates porphyrins through a photochemical reaction, and as a result, singlet oxygen is released, which selectively and atraumatically irradicates bacteria. Its calming benefits make it ideally suited for problematic skin types,12 as well as reported improvements in mood and fatigue.13 It has the ability to penetrate 2-3mm in the epidermis.6

Red light 633 nm is proven to stimulate collagen and elastin synthesis, as well as skin tone, texture, and reduce the appearance of fine lines.14 Red light specifically at 633 nm can penetrate at 8-10mm in the mid dermis, and recharges ATP which enhances and restores optimal cell function, whilst accelerating cell renewal.9 In addition, it helps to reduce hyperpigmentation, increase skin hydration and stimulate blood circulation.4

Near-infrared (NIR) light 830 nm provides advanced skin rejuvenation benefits by specifically modulating inflammation and accelerating healing, and is suited to even the most sensitive skin types.7 NIR 830 nm is outside of the visible light spectrum and is invisible to the naked eye, but can penetrate to the subcutaneous layer at between 20-100mm.4

As well as the wavelength, two additional parameters are also important to understand; the irradiance, or power density, which is measured in mW/cm2, as well as the dose or energy density, which is measured in J/cm2. The power density, sometimes referred to as intensity, can be thought of as the spatial concentration of power.9 Reduced power density, as well as the energy density may impede treatment outcomes as it means treatment will be unsuccessful at a cellular level within the skin. Essentially, effective LED treatment, at whichever wavelength is used, refers to using low-level light energy through specific wavelengths to stimulate, regulate, or inhibit specific cellular processes to deliver therapeutic benefits. LED phototherapy delivers energy to improve cellular performance and facilitate repair mechanisms.15

This will partly depend on the condition(s) being treated. Not all colours/wavelengths are supported by strong evidence to demonstrate effective skin rejuvenation and/or medical benefits,7particularly when used in combination. Where devices have more than one colour/ wavelength, it’s key to ensure that the manufacturer specifications are supported by evidence and appropriate for use. Blue 415 nm, red 633 nm and NIR 830 nm are robustly supported clinically,2-10 and each wavelength is capable of delivering multiple benefits. By comparison, green 520 nm and yellow 590 nm wavelengths are blocked by blood and have limited clinical data and mixed outcomes with regard to demonstrating consistent therapeutic benefit.16 Yellow LED application has limited evidence to support clinical benefit to individuals with photodamaged skin. Both wavelengths have limited clinical evidence to support clinical use.17

The versatility and diversity of clinically-proven LED wavelengths means that it can be used as a highly effective standalone course, as well as a combination treatment alongside almost all other treatments, most commonly injectables, chemical peels, threads, fractional procedures, radiofrequency, and microneedling. The scope of indications ranges from cosmetic, including photodamage/dyschromia, rejuvenation, moderate and severe acne, redness, as well as inflammation.10 Medical conditions that benefit can include improving musculoskeletal pain, wound healing, as well as psoriasis.9

Treatment is contraindicated in individuals who suffer with epilepsy or seizures which are triggered by light, porphyria, autoimmune conditions, polymorphic light eruption, photosensitive eczema and active cancers.9 Caution should also be exercised by the treating practitioner in patients who are pregnant, those with eye disease and related conditions, light induced migraines, photosensitising medications/skincare products and St John’s Wart.18

LED using clinically-proven wavelengths can be considered an integral part of many treatments. The cumulative and long-term benefits are widely described and supported in the literature in both men and women, across all Fitzpatrick skin types. There is considerable data to demonstrate that LED can effectively enhance and accelerate the results of any skin treatment, and arguably provides a more effective skin maintenance regimen than a topical skincare approach alone. Many inflammatory skin conditions on the face and body require long-term management and can benefit from LED (excluding photosensitive diagnoses), both as an initial and intensive course, and as maintenance.